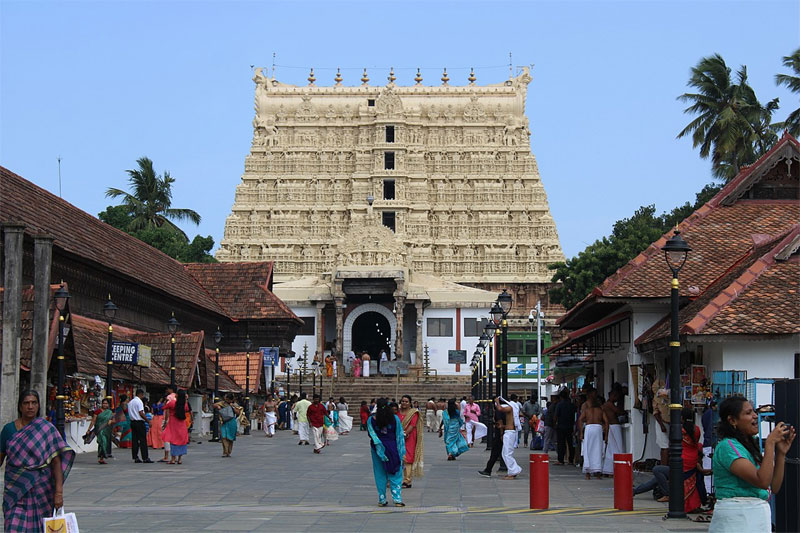 Sri Padmanabhaswamy Temple is a famous Hindu temple, located in Thiruvananthapuram in the state of Kerala, India. This temple is completely dedicated to Lord Vishnu and is one of the major Vaishnana temples in India. This temple is one of the famous religious places in the state of Kerala and is also the main attraction center of foreign tourists. Padmanabha Swamy Temple is an important place for devotees to worship Lord Vishnu. This temple was rebuilt by Maharaja Martad Varma of Travancore.

According to the legend, the idol of Lord Vishnu was first found from this place, after which this temple has been constructed at the same place.

In the sanctum sanctorum of the temple is a huge and magnificent statue of Lord Vishnu, for which thousands of devotees come from all the states of India every year to see it. It is believed that Thiruvananthapuram is named after the serpent named 'Anant' of God. Here the resting state of Lord Vishnu is called ‘Padmanabha’ and in this form, the Lord Vishnu is famous here as Padmanabha Swamy.

Kerala is a unique confluence of culture and literature. It has beautiful beaches on one side and the amazing scenic beauty of the hills in the Western Ghats on the other side, situated amidst all these priceless natural funds - Padmanabha Swamy Temple. Its architecture is made by seeing, the fine workmanship of the temple construction is also worth seeing.

For entering the Padmanabhaswamy temple, it is mandatory for men to wear a ‘Dhoti’ and women to wear a ‘Saree’. Hindus get admission in this temple only. Two important festivals are organized in the temple every year, one of which is celebrated in the months of March and April and the other in the months of October and November.

The temple's gopuram is built in the Dravidian style. The Padmanabha Swamy Temple is an amazing example of South Indian architecture. The complex of the temple is very spacious, which is seven storeys high. The gopurams are furnished with artifacts. There is also a lake near the temple, which is known as 'Padmathirtha Kulam'.