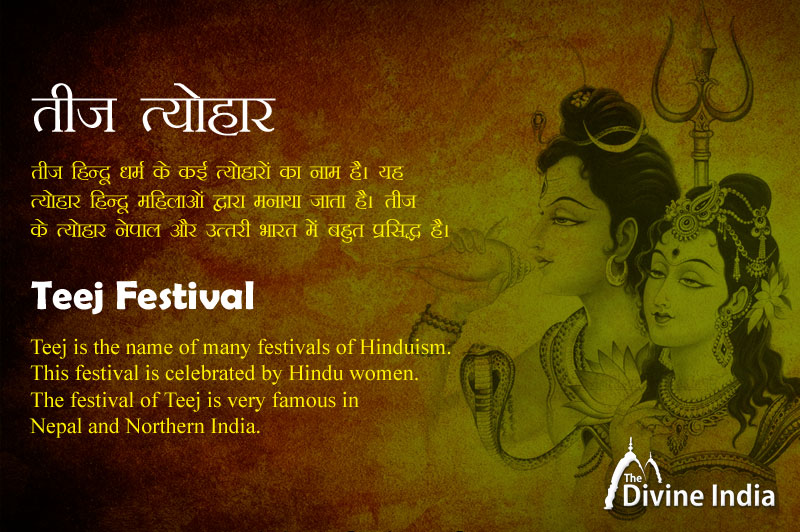 Teej is the name of many festivals of Hinduism. This festival is celebrated by Hindu women. The festival of Teej is very famous in Nepal and Northern India. Hariyali Teej and Hartalika Teej welcome the monsoon season and are mainly celebrated by girls and women with henna on their hands, wearing red and green clothes, song, dance and prayer rituals. The monsoon festival of Teej is mainly dedicated to Parvati and her union with Shiva. Women observe fast in the celebration of Teej.

Karji Teej is also known as Choti Teej. It is quite famous in the states of India - Uttar Pradesh, Madhya Pradesh, Rajasthan, Bihar.

Hartalika is a combination of Hindi words Harit and Aalika which mean "abduction" and "female friend" respectively. According to the legend of Hartalika Teej, Parvati incarnated as Shailputri. Is. It is quite famous in the states of India - Uttar Pradesh, Madhya Pradesh, Rajasthan, Bihar and Maharashtra. In Maharashtra this festival is associated with the festival of Gauri Habba.

Akha Teej, also known as Akshaya Tritiya, falls on the third day of the full moon in the month of Vaishakh. It is an auspicious day for the birthday of Parashurama, the sixth incarnation of Vishnu. On this day Ved Vyas and Ganesha started writing Mahabharata.

Teej is part of a wider celebration in Telangana which is a precursor to other festivals celebrated and is known as Kajal Teej. Kajal Teej is one of the biggest festivals of Banjara tribe.

Kevada Teej, also known as Kevada Trij, is a festival mainly celebrated in Gujarat. This festival is celebrated in Gujarat on the third day of Shukla Paksha of Bhadra. This fast is similar to Hartalika Teej fast. Married and unmarried women observe fast on this day and offer kewra flowers to Parvati and Shiva.