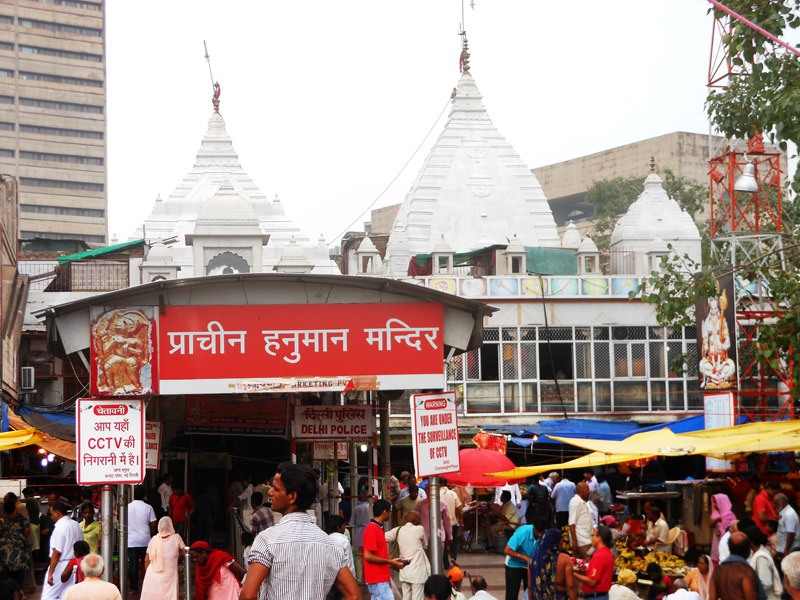 Hanuman Mandir is located at Baba Kharak Singh Marg in Connaught Place, New Delhi. It is one of the oldest Hanumana Temple in India.The Temple is said to be built by Raja Jai Singh around 1724 AD.

The Main Idol at the temple is that of Hanumana, facing south. The deity holds a gada in his left hand and his right hand rests on his chest in veneration to the adjacent idols of Rama, Lakshmana and Sita. It is believed that Bhagwan Hanuman destroy all the evils with the Gada in his hand. Devotees congregate at the temple in large numbers on Tuesday and Saturday. Hanuman Jayanti (birthday celebrations of Lord Hanumana) is also celebrated every year with great fanfare.

The ceiling of the main hall has embossed artwork depicting the Ramayana, the great Hindu epic. The Complex outside the temple is lined with tiny shops selling garlands and prasad. One can also find mehndi artists and their intricate henna application.

History
The city of Delhi was the seat of power for many dynasties. Unlike the other Hindu Temples, where symbol above the spire (vimana) is more commonly an Om or Sun sign, this temple has a crescent moon symbol (an Islamic symbol) in the vimana. This crescent symbol is believed to have saved this temple from destruction from Mughal attacks.

Other Hanuman Temples of Delhi