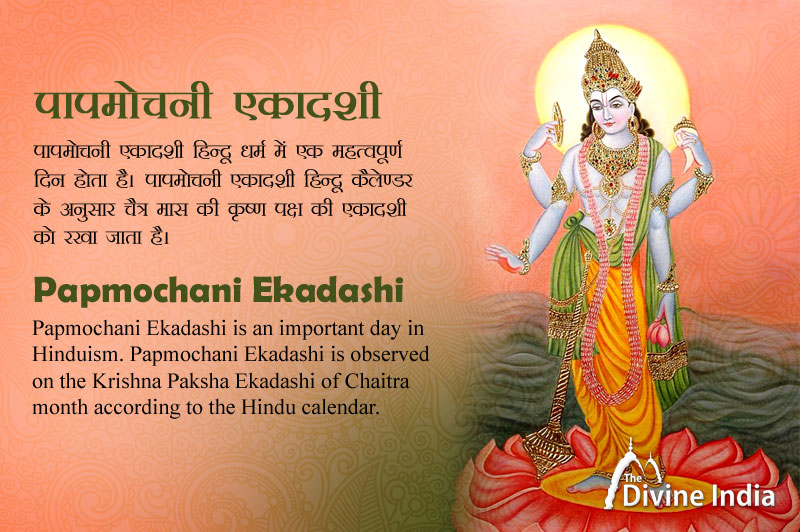 Lord Vishnu is worshiped with full dedication on the day of Papmochani Ekadashi. The person observing the fast should wake up at sunrise and take a bath. A small idol of Lord Vishnu is placed at the place of worship and devotees offer sandalwood paste, sesame seeds, fruits, lamps and incense to the Lord. It is considered auspicious to recite 'Vishnu Sahasranama' and 'Narayan Stotra' on this day.

Fruits of Worship and Significance of Papmochani Ekadashi Vrat

The importance of Papmochani Ekadashi fast has been described in 'Bhavishyottara Purana' and 'Harivasara Purana'. It is said that Papmochani Vrat liberates one from the effects of all sins. By observing Papmochani Ekadashi fast, learning at Hindu pilgrimage places is more virtuous than donating cows. Those who observe this auspicious fast enjoy all the worldly pleasures and eventually find a place in 'Vaikuntha', the heavenly kingdom of Lord Vishnu.

In ancient times there was a beautiful forest called Chitraratha. In this forest, Devraj Indra Gandharva used to live freely in this forest along with girls and deities. A sage named Medhavi was also doing penance there. The sage Shiva worshiped and the Apsaras Shiva Drohini was Anang's maid.

Once Kamadeva sent an Apsara named Manjughosha to him to break the sage's penance. The young sage was fascinated by Apsara's work on gestures, dance, songs and sarcasm. 57 years have passed while doing Rati-Krida. One day Manjughosha asked for permission to go to Devlok.

On asking Manjughosha's permission, the consciousness of the sage awakened and he realized that Apsara Manjughosha is the only reason for taking me to the abyss. He cursed Manjughosha to be a vampire. Hearing the curse, Manjughosha trembled and asked the remedy for salvation. Then the sage asked to keep the fast of Papmochani Ekadashi. He went to father Chyawan's ashram after telling the remedy for salvation. Hearing the curse, the Chyawan sage severely condemned the son and ordered him to observe the fast of Paapmochani Chaitra Krishna Ekadashi. Sage Medhavi also observed the Papmochani Vrat and was freed from his sins. Due to the effect of the Papmochani fast, Manjughosha Apsara, freed from her body, went to Devlok.