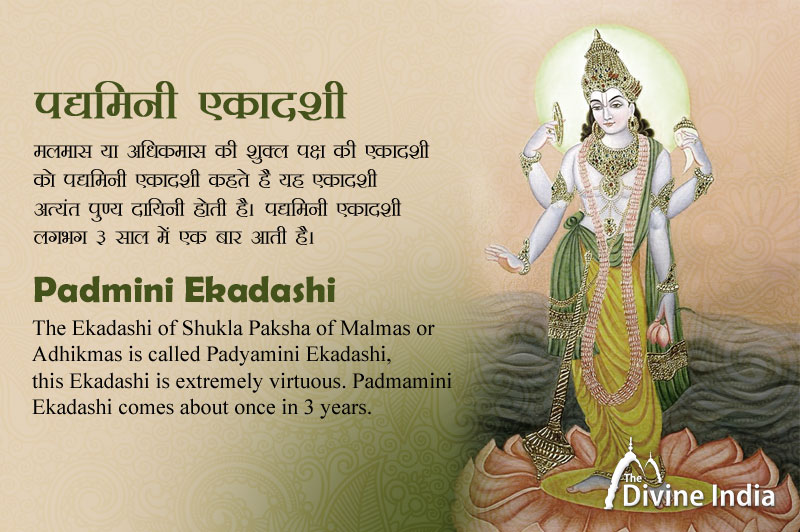 Lord Vishnu is worshiped with full dedication on the day of Padmini Ekadashi. The person observing the fast should wake up at sunrise and take a bath. A small idol of Lord Vishnu is placed at the place of worship and devotees offer sandalwood paste, sesame seeds, fruits, lamps and incense to the Lord. It is considered auspicious to recite 'Vishnu Sahasranama' and 'Narayan Stotra' on this day.

A person's life is considered successful by observing Padmamini Ekadashi fast. Those who observe the Padmini Vrat enjoy all the worldly pleasures and eventually find a place in the heavenly kingdom 'Vaikuntha' of Lord Vishnu.

Padmini Ekadashi is very dear to the Lord. The one who strictly observes this fast goes to Vishnu Lok. By observing this fast, a person attains the fruits of all kinds of sacrifices, fasts and austerities. According to the legend of this fast:

Shri Krishna says that in Treta Yuga there was a very mighty king Ketrivirya. This king had many queens, but the king did not get a son from any queen. Due to being childless, the king and his queens used to remain unhappy in spite of all the comforts. Wishing to have children, then the king along with his queens went to do penance. After doing penance for thousands of years, only the bones of the king remained, but his penance was not successful. The queen then asked Goddess Anusuya for the remedy. The goddess asked him to observe a fast on the Ekadashi of Shukla Paksha in the month of Mal.

Anusuya also told the queen the law of fasting. The queen then observed the fast of Padmini Ekadashi as per the law prescribed by Goddess Anusuya. At the end of the fast, the Lord appeared and asked for a boon. The queen said to God, Lord, if you are pleased with me, then give a boon to my husband instead of me. The Lord then asked the king to ask for a boon. The king prayed to God that you should give me such a son who is full of all qualities, who is respected in the three worlds and will not be defeated by anyone except you. The Lord left after saying good. After some time the queen gave birth to a son who came to be known as Kartavirya Arjuna. Later on, this child became a very mighty king who had also taken Ravana captive.

Blog/Story
Never Compare Yourself to Others