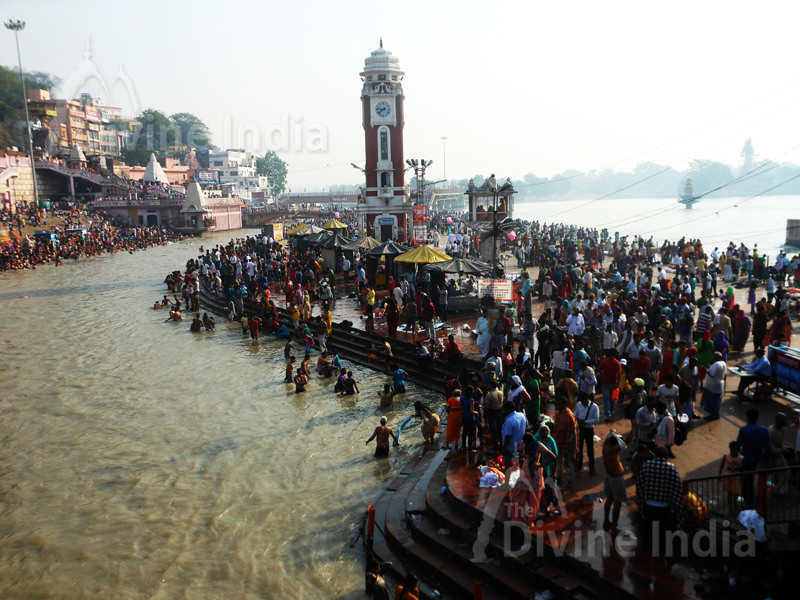 Haridwar meaning 'Gateway to God', also referred as the Mayapuri, Gangadwar, Mokhsadwar is an ancient city in the Uttarakhand state, in northern India.

It is one of the seven holiest places of the Hindus, located on the banks of River Ganges. It is the place where river Ganga descends to the Indo-Gangetic plains after flowing for about 250 kilometres (157 mi) from its source at Gaumukh, Gangotri Glacier.

According to the Samudra manthan, Haridwar along with Ujjain, Nashik and Prayag (Allahabad) is one of four sites which received the drops of Amrit, the elixir of immortality, from the pitcher carried by the celestial bird Garuda.

Kumbh Mela is celebrated at these places after every 3 years rotated over these 4 destinations. Maha Kumbh Mela will be held in Haridwar in 2021.

During the Kumbha Mela, millions of pilgrims, devotees, and tourists from India and abroad congregate in Haridwar to perform ritualistic bathing in the river Ganges to wash away their sins to attain Moksha.

Brahma Kund is believed to be the spot where the Amrit fell. It located at Har Ki Pauri which means the footsteps of the Lord, and is considered to be the most sacred ghat of Haridwar. It is believed that Prince Bhagirath served self-punishment here to rescue the souls of his ancestors who had died due to the curse of Kapil Muni. When his prayers were answered then the Ganga flowed from the locks of Lord Shiva and revived the sons of King Sagara.

Therefore, according to the Hindus, the salvation of the ancestors can be attained by standing on the holy waters at Har-ki-pauri.

At twilight, the evening aarti is performed. The reflection of the floating golden diyas in the river creates an enchanting view of the ghat to the visitors.

There are many temples in the vicinity. The Chandi Devi temple built by Suchat Singh is located on the top of a Neel Parvat on the banks of river Ganga.

The Maya Devi temple is located at a place where it is said that the heart and navel of Goddess Sati fell. It is also famous as one of the Siddhapeethas. Another important temple is the Mansa Devi temple which is located atop Bilwa Parwat and is dedicated to Goddess Mansa Devi. Festivals like the Kavad Mela, Somvati Amavasya Mela, Ganga Dashara, Gughal Mela are celebrated with lots of pomp and gaiety.

Haridwar has a pleasant climate for most of the year. The climate never goes to the extreme which makes Haridwar one such tourist spot that can be visited any time of the year. In summer the temperature in Haridwar varies from 35 degrees to 45 degrees Celsius. Summer season is mild and moderate followed by a good rainfall in monsoon.

The winter temperature ranges from 10 degrees to 30 degrees Celsius. The winters are very cold in Haridwar. Wollen clothing is essential during this period.

Monsoon season is from July to September and during this time most activities are suspended due to the heavy blast of rains. Rainfall is highest in the month of August. During the month of October and November the conditions are pleasant and temperate.

The ideal time to make a trip to Haridwar is between the months of September and April.