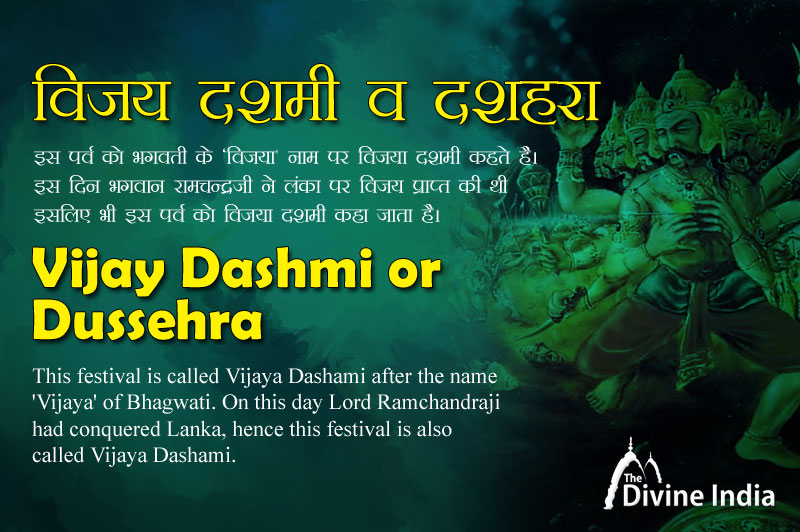 The festival of Vijaya Dashami or Dussehra is celebrated on the tenth day of Shukla Paksha of Ashwin month. This day is considered a very important day in Hinduism.

In Bengal, this festival is celebrated with great pomp as Durga Parv. Ramlila starts a few days before this festival in every corner of the country. At sunset, the effigies of Ravana, Kumbhkaran and Meghnath are burnt.

Once Parvati ji asked Shiva about the fruits of the festival of Dussehra. Shiva replied, 'Ashwin Shukla Dashami' in the evening at the time of star rise, there is a period called 'Vijay' which is the one who fulfills all desires. If Shravan Nakshatra is in yoga on this day, then it is even more auspicious. Lord Ramchandra ji defeated Ravana by climbing on Lanka during this victory period. It was during this period that the Shami tree held Arjuna's bow named Gandiva.

Parvati ji said when and for what reason did the Shami tree hold Arjuna's bow and when and what kind of lovely voice was spoken to Ramchandraji, so please explain to me.

Shiva replied - Duryodhana defeated the Pandavas in gambling and had put a condition for twelve years of exile and in the thirteenth year of unknown abode. If they are detected in the thirteenth year, they will again undergo exile for twelve years. Arjuna had hidden his Gandiva bow on the Shami tree in this unknown abode and himself took a job with King Virata in the guise of Brihanla. When Virat's son Kumar took Arjuna with him to protect the kingdom, Arjuna lifted his bow from the Shami tree and conquered the enemies. On the day of Vijaya Dashami, the Shami tree declared the victory of Ramchandraji while Ramchandraji set out to climb Lanka. That is why Shami worship is done in the period of victory.

Once, on the request of Yudhishthira, Shri Krishna told him that on the day of Vijay Dashami, the king himself should decorate his slaves and elephants and horses. On that day, taking one's priest along with him should go in the east direction and enter the boundary of another king and worship the Ashta-Digpalas and Parth Devta with Vedic mantras by doing Vastu Puja there. By making an idol or effigy of the enemy, an arrow should be shot in his chest and the priest should chant the Veda mantras. Elephants, horses, weapons, weapons should be inspected by worshiping Brahmins. The king who wins by this method always wins over his enemy.