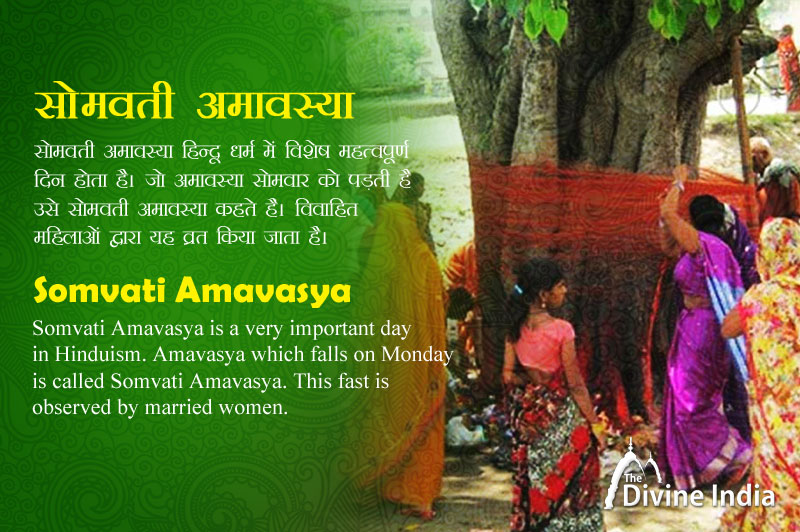 Somvati Amavasya Vrat is also known as 'Ashwath Pradakshina Vrat' in the scriptures. 'Ashwath' means Peepal tree. Lord Vishnu resides on the Peepal tree. Therefore Lord Vishnu is also worshiped on the day of Somvati Amavasya. On this day, bathing and charity are considered to be the best of all. According to the words of sage Vyasa, on this day, by meditating, fasting, fasting, one gets the virtuous fruit of thousands of cows.

It is believed that in the Mahabharata, Bhishma, explaining the importance of this day to Yudhishthira, said that a person who bathes in the holy rivers on this day will be prosperous, healthy and free from all miseries. It is also believed that taking a bath gives peace to the souls of the ancestors.

On this day, there is a rule to worship Peepal by wrapping the thread 108 times and doing circumambulation. There is also a law to worship Lord Vishnu on this day. Paddy, betel and standing turmeric are mixed and offered ritually on the Tulsi plant. At the time of Pradakshina, 108 fruits should be kept aside and donated to Vedapathi Brahmins at the time of completion.

This is the main fast of women. Women observe this fast for the longevity of their husbands. On the day of Somvati Amavasya, charity should be given according to one's ability. Women who cannot observe fast on every new moon should observe fast on Somvati Amavasya and circumambulate the Peepal tree 108 times by wrapping it in a thread. Peepal tree should be worshiped lawfully. By observing this fast one gets eternal good fortune. Monday is the day of the moon. On this day the Sun and the Moon remain in a straight line. Therefore, this festival is considered to be of special merit.

There are many stories related to Somvati Amavasya. Tradition has it that these stories are recited ritually on the day of Somvati Amavasya. There was a poor Brahmin family, which had a husband, wife and a daughter. The daughter slowly started growing up. With time, all the feminine qualities were developing in that girl. The girl was also beautiful, cultured and virtuous, but due to being poor, she could not get married. One day a monk came to the Brahmin's house, who was very pleased with the service of the girl. Blessing the girl for a long life, the sage said that there is no marriageable line in the girl's palm. The Brahmin couple asked the sadhu the remedy that what should the girl do in such a way that marriage becomes a yoga in her hands. Read More...