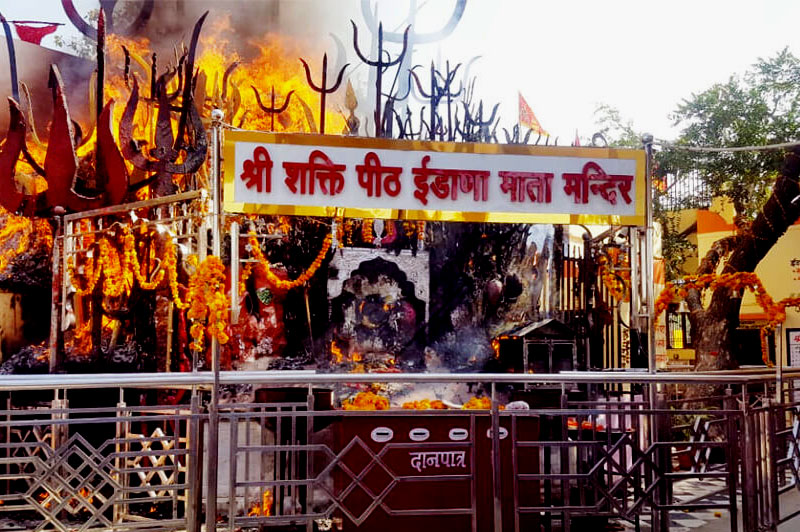 The Edana Mata Temple is an important Hindu temple that is located in the village of Edana in the Indian state of Rajasthan. This temple is known as Idana Mata Temple in Rajasthan. This place is 60 km from Udaipur city. The distant Aravali is nestled among the hills. The name of this temple became famous as the Queen of Idana Udaipur Mewal. Idana Mata's court is open. There is also Akhand Jyoti in the court of the mother, which is always burning.

If there is a fire bath in the Edana Mata temple, a large number of devotees from the surrounding villages come to see this scene and fulfill their wish. It is said that when the burden of Idana Mata is heavy, the mother herself assumes the form of Jwaladevi. This fire gradually takes a gigantic form and its flames reach 10 to 20 feet. This happens two to three times per month. The special thing about this fire is that till today nothing other than makeup comes to no heat. Devotees call it the fire bath of the goddess and due to this fire bath, the temple of mother could not be built here.

It is believed that whatever the devotee sees of this miraculous fire, his wish is fulfilled. In this temple, the devotees offer trident to fulfill their wish and offer a puja to the childless child. But this temple is famous because of two powers - first, the patient who suffers from paralysis, gets healthy in the court of the mother. Second, the fire in the court of the mother.

The special thing about this Shakti Peetha is that here the mother's darshan is kept open for twenty-four hours, all the paralyzed patients come to sleep in the check in front of the mother's statue in the night. Major festivals are celebrated here with pomp.

Blog/Story
The greatest strength is the endurance