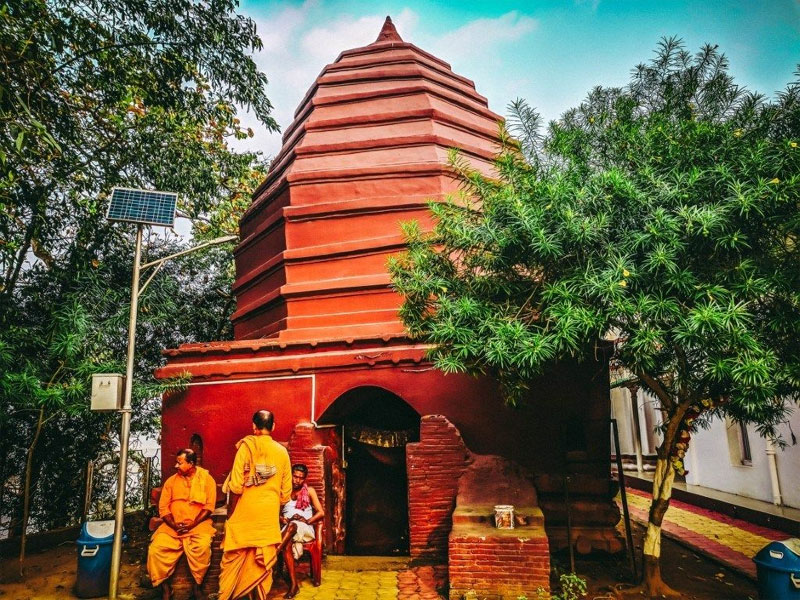 Umananda Devaloi is an ancient Shiva temple situated in the middle of the Brahmaputra River in Umananda Island (Mayur Island) in front of the office of the Deputy Commissioner of Kamarupa or Kachhari Ghat in Guwahati. The name of this temple comes from two Hindi words in Umananda. The first word 'Uma' which is a name of Mata Parvati, wife of Lord Shiva and the second word 'Anand' which means happiness.

It is known as the smallest inhabited river island in the world. The local boats available on the banks of the Brahmaputra take visitors to the island. The mountain on which the temple is built is known as Bhasmakal. The surroundings of the temple are amazing and divine. Surrounding the temple is the beautiful nature, it is a shelter for nature lovers.

It is believed that Lord Shiva resided here as Bhyananda. According to the Kalika Purana, at the beginning of creation, Shiva applied Bhasma to his body at this place and imparted knowledge to Mata Parvati (his wife). It is said that, when Lord Shiva was meditating on this hill, Kamadeva disrupted his yoga and hence was burnt to ashes by the fire of Shiva's anger and hence the hill got the name Bhasmakala.

The Umananda Temple was built in 1681 to 1694. The construction of this temple was done by Raja Gadadhar Singh, a king of the Ahom dynasty and one of the strongest rulers.

The original temple was severely damaged by a devastating earthquake in 1897. Later, the temple was rebuilt by a local rich merchant. The Umananda temple was beautifully crafted by skilled Assamese workers.

In addition to Lord Shiva in the Umananda temple, idols of Lord Vishnu, Surya, Ganesh and other Hindu deities are enshrined in the temple.

It is believed that, worshiping here on Amavasya is most enjoyable when it comes on Monday. Shiva Chaturdashi is the most colorful festival which is held here every year. Many devotees come to the temple on this occasion to worship the deity.