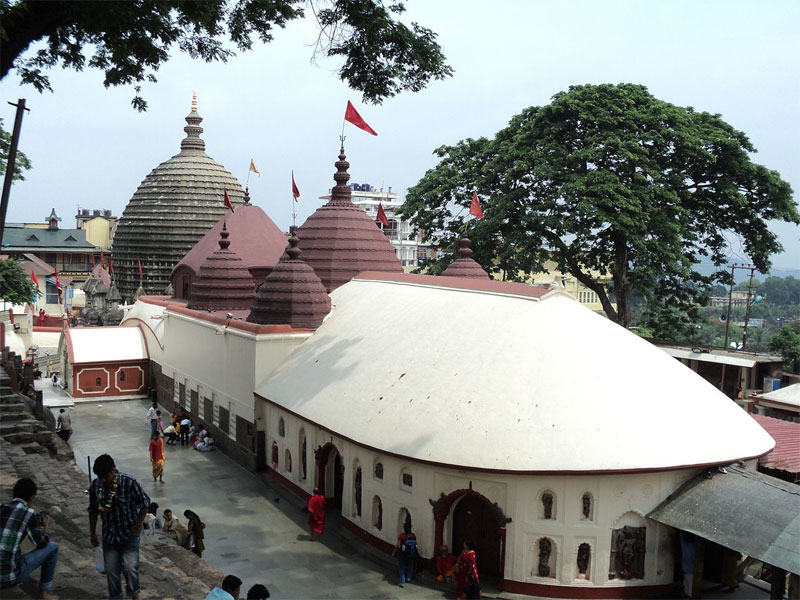 Kamakhya Temple is a Hindu temple dedicated to Kamakhya Devi. It is situated on the Neelachal Mountain, 10 km from Kamakhya and, 8 kilometers from the city of Guwahati, which is located near Dispur, the capital of Assam. It is a temple of Goddess of power, Sati. Kamakhya temple is one of the 51 Shakti Peeths of Goddess Sati. There is the worship of the mother of Sati as form the vagina. Once in a year the Kamakhya temple is closed for three days in the month of June. It is believed that the goddess happens during her monthly cycle, there is a flow of blood, which causes the river of Brahmaputra to become red.

The Kamakhya Temple is the main temple in a complex of individual temples dedicated to ten Mahavidyas (a group of ten forms of power etc in Hindu religion): Kali, Tara,  Sodashi, Bhubaneswarwari, Bhairavi, Chinnamasta, Dhumavati, Baglakami, Matangi and Kamala, Tripurasundar, Matangi and Kamala is reside inside the main temple while the other seven are reside in individual temples. This is an important pilgrimage site for all the sects of Hindus and especially Tantric worshipers. But, it is also a major tourist destination for foreign tourists.

The yoga festival of Ambubachi, which falls once a year for all the Tantricians, Mantras and Siddhas of the world, is indeed a boon. It is a festival of Ambuachi, Bhagwati (Sati). Which is celebrated every year in the month of June according to the date.

It is believed that the Kamakhya temple was destroyed in the beginning of the 16th century and later in the 17th century it was reconstructed by King Nara Narayan of Cooch Bihar.

There are many mythological stories associated with Kamakhya temple, but a story which is important for this temple. According to mythology, King Daksha Prajapati was the son of Lord Brahma and was the father of Sati. Sati was the first wife of Lord Shiva. King Daksh organized a grand yagya in which all the Goddesses, Rishis and saints were invited. In this yagya Lord Shiva was not invited. Sati felt humiliated by this incident because Sati felt that King Daksh has insulted Lord Shiva. Sati had sacrificed his life by jumping into the yag agni. Then Lord Shankar Devi was churning the whole universe with the dead body of Sati, during this time, Lord Vishnu divided the body of Sati into 51 parts with his Sudarshan Chakra. Sati's body parts fell on different places, which became known as Shakti Peeth. In the famous Kamakhya Temple, the Goddess's womb and vagina are worshiped.

It is said that the God of love, Cupid had to suffer loss due to his curse. Cupid discovered the womb and the genitals so that he was free from the curse. Kamdev got his power here and established a statue of 'Kamakhya Devi' and worshiped him.

According to Kalik Purana, Kamakhya Temple is where the Goddess Sati met with Lord Shiva. In Sanskrit the meaning of this union is "Kam", and therefore, this place is called Kamakhya.

Blog/Story
The greatest strength is the endurance