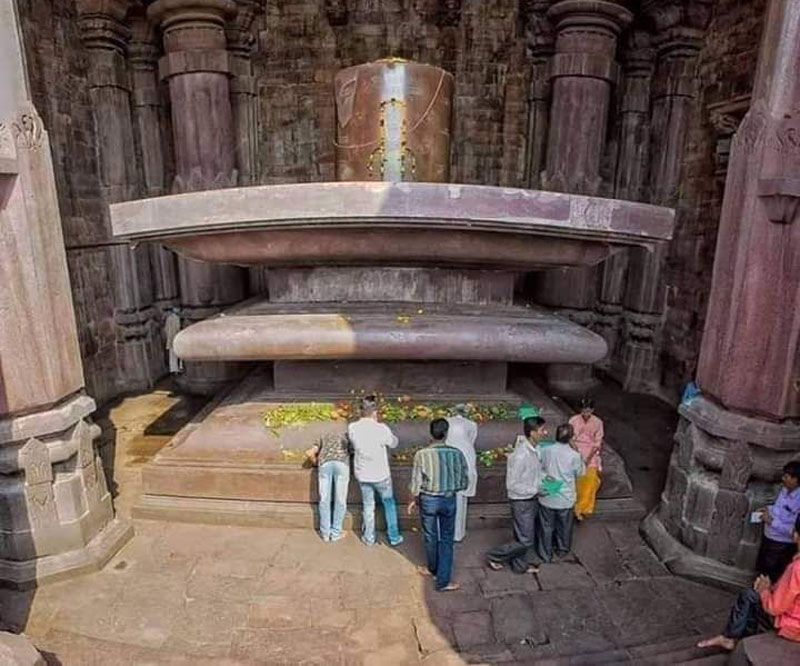 Bhojpur Shiva Temple is a Hindu temple located on a hill adjacent to Bhojpur, located 32 km from Bhopal, the capital of the Indian state of Madhya Pradesh. It is a huge temple which is incomplete Shiva temple. It is also known as Bhojpur Shiva Temple or Bhojeshwar Temple. It is believed that this Shiva temple was built by the famous king Bhoja (1010 AD - 1055 AD) of the Paramara dynasty. The biggest attraction of this temple is located in this temple is Shiva Linga which is installed in the sanctum sanctorum of this temple, which is about 18 feet in height and 7.5 feet in diameter. This Shiva Linga is the largest Shiva Linga constructed from a single stone.

The construction of the temple is believed to have started in the 11th century during the reign of Paramara King Bhoja. The construction work was abandoned for unknown reasons, with architectural plans engraved on the surrounding rocks. Unfinished material left on the site, rock-cut architectural paintings, and masonry marks have helped scholars understand the temple building techniques of 11th century India. The temple has been designated as a monument of national importance by the Archaeological Survey of India (ASI).

Situated in the Obedulla development block of Gauhar Ganj tehsil of Raisen district, this Shiva temple was built in the 11th century by King Bhoj I of the Parmar dynasty. Leaving behind concrete jungles in the lush green lap of nature, this specimen of high quality architecture built on the banks of the Betwa River was prepared with the cooperation of the architects of Raja Bhoj.

The specialty of this temple is its four pillars with a height of 40 feet. The incomplete roof of the sanctum sanctorum rests on these four pillars. Apart from this, the geology, the satambha, the pinnacle, the urn and the rocks are not inscribed on the surface like inscriptions. There were plans to build other parts of the temple, mandapas, mahamandapas and gaps on the broad platform of Bhojeshwar temple. This is evident from the maps associated with the temple plan built on the stones near the temple.

The lingam is so large that its consecration cannot be done by standing on the earth. Due to the giant Shivling inside, there is not enough space to be anointed in any other way. Therefore, the consecration and worship of this Shivling is always done by climbing on its aquarium. Some time ago, even the common devotees could go to the Jalhari, but now only the priests climb the water stream twice a day and anoint and worship the Lord.

An annual fair is held twice a year in this famous place, which takes place on the occasion of Makar Sankranti and Mahashivaratri. People from far and wide reach here to participate in this religious festival. A three-day Bhojpur festival is also being organized here on Mahashivratri. Just opposite the Bhojpur Shiva temple is a cave in the western direction, it is known as Parvati cave. This cave has many sculptures of archaeological significance. In the same temple complex, there is a memorial site for Acharya Matunga, who wrote the source Bhaktambar.

Blog/Spiritual science
Why do Hindu women put vermilion in Mang?