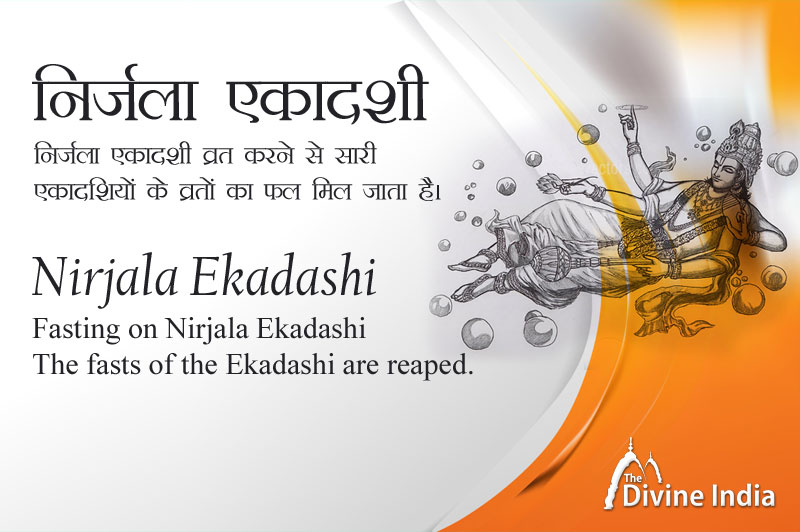 Ekadashi fasting holds an important place in Hindu religion. Ekadashi of Shukla Paksha of Jyeshtha month is called Nirjala Ekadashi. Drinking water is prohibited during the fast of Nirjala Ekadashi, meaning that not a single drop of water is consumed in the whole fast. Therefore it is called Ekadashi Ho Nirjala Ekadashi. This Ekadashi is also called Bhimsen Ekadashi whose story is told in this article.

Jyeshtha Shukla Ekadashi is considered to be the best among the twenty four Ekadashis of the year. By observing this fast, all the Ekadashi fasts are reaped.

This fast should be performed by both males and females. Milk may be taken along with the fruit, even when refreshments are prohibited. On this day, worshiping Lord Vishnu in Sheshashi form while performing waterless fast has a special significance. On this day, by chanting 'Om Namo Bhagwate Vasudevayah', donating cow dung, clothes, chhatra, fruits etc. should be done.

Once Maharishi Vyas visited Pandavas here. Bhima said to Maharishi Vyas, God! Yudhishthra, Arjuna, Nakula, Sahadeva, Mata Kunti and Draupadi all fast on Ekadashi and ask me to keep the fast, but I cannot live without eating, so tell me some such fast by avoiding the pain of being destructive on Chabis Ekadashi Which I do not have any special inconvenience to do, and I also get the fruits of everything. Maharishi Vyas knew that there is a fire called Briq in the stomach of Bhima, so his hunger does not calm down on eating a large amount. Drinking water during bathing during this fast is not guilty, this fast will also benefit the virtue of other twenty-three Ekadashis. Follow this fast throughout your life. Bhima fasted Nirjala Ekadashi with great courage, which would have resulted in the morning. When he became insensible, the Pandavas made Gajajal, Tulsi Charanamrit Prasad, make him smile. Therefore, it is also called Bhimsen Ekadashi.