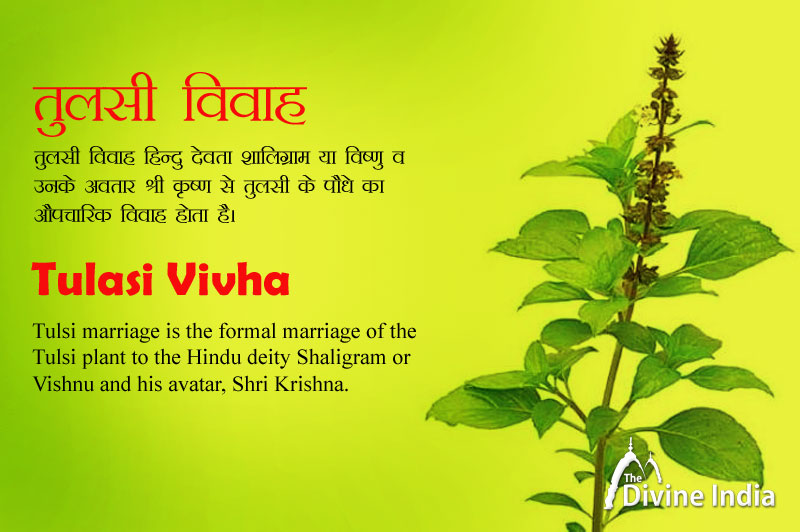 Tulsi marriage is the formal marriage of the Tulsi plant to the Hindu deity Shaligram or Vishnu and his avatar, Shri Krishna. Tulsi marriage Hindu religion is very important. It is believed that auspicious marriages begin in Hinduism only after this marriage. Shukla Paksha of Kartik month comes after Ekadashi.

Tulsi is a plant which has great importance in Hindu Santhan Dharma. It is believed that the house where the basil plant grows. Negative energy runs out in that house.

The formal festival is performed anytime between Prabodhini Ekadashi and Kartik Purnima. Tulsi is considered as a goddess in Hinduism. And sometimes she is considered as the consort of Vishnu, which means "Vishnupriya", "Beloved of Vishnu".

According to Hindu belief, the virtue that comes from marrying a daughter. Equal virtue is obtained marrying Tulsi. The biggest virtue in a daughter's marriage is Kanyadan. If a person has not done Kanyadaan, then he must do Tulsi Vivah once in his life. It is believed that by marrying Tulsi with complete rituals, one gets happiness and good fortune and the grace of Lord Vishnu remains.

According to Hindu scripture, Tulsi's plant was a woman named "Vrinda" (Brinda; synonym of Tulsi). He was married to the Asura king Jalandhar, who became invincible due to his piety and devotion to Vishnu. Even Shiva could not defeat Jalandhar, so he requested Vishnu - the guardian of Trimurti - to find a solution. Vishnu described himself as Jalandhar and touched Vrinda. She realized that it was not her husband but Vishnu. This destroyed his purity.

After his purity was destroyed, Jalandhar lost his power and was killed by Shiva. Vrinda cursed Vishnu to separate from his wife Lakshmi in future. This was later completed when Rama was born in the earth in an avatar. Rama's wife Sita was later kidnapped by the demon king Ravana. Vrinda immersed herself in the sea. Lord Vishnu transferred his soul to a plant, later called Tulsi.

As a blessing by Vishnu to marry Vrinda in his next birth, Vishnu - as Shaligram - married Tulsi on Prabodhini Ekadashi. To commemorate this event, Tulsi Vivah is organized.