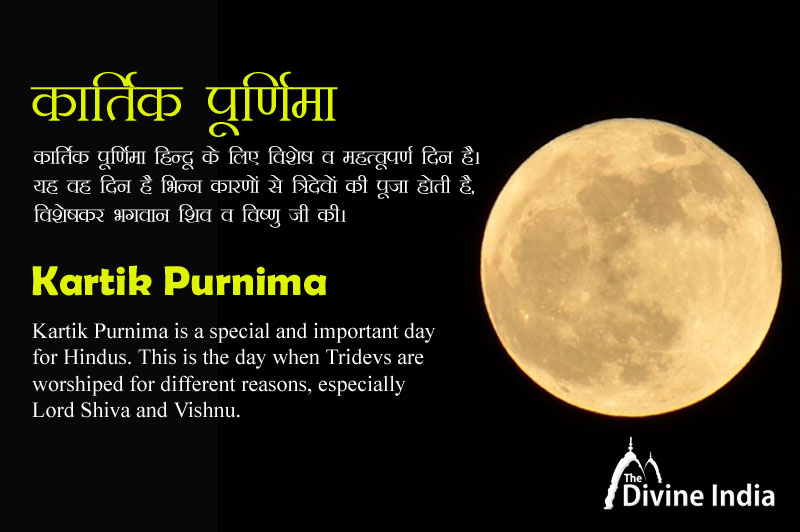 Kartik Purnima is a special and important day for Hindus. This is the day when Tridevs are worshiped for different reasons, especially Lord Shiva and Vishnu.

On this day, a demon named Tripurasun was killed by Mahadev. Hence it is also called as Tripuri and Tripurari Poornima. This day is also called Dev-Diwali in many places in India which means festival of lights of the gods. It is believed that this day is called Dev-Diwali because the demon Tripurasan had created fear among the deities, so after Mahadev killed this demon, the gods declared this day as the festival of lights.

Lord Shiva's son Kartikeya was also born on this day. Kartikeya is also called the god of war.

Thousands of lamps are lit at the ghats in Varanasi. People offer lamps to the priests. Lamps are lit throughout the night in homes and Shiva temples. This day is also known as 'Karthik Deepratna' - the Jewel of the Lights in Kartik. Small boats are also lit in the rivers.

Lord Vishnu had his Matsya incarnation on this date. Ganga bath, lamp donation etc. have special significance on this day. This day is also known as 'Karthik Snan'. On this day Tulsi plant got the name Vrinda.

This day is also special for the worshipers of Lord Krishna. It is believed that Krishna and Radha performed Raas dance and Krishna worshiped Radha on this day. This day is also dedicated to ancestors, dead ancestors.

In Rajasthan, the Pushkar Mela or Pushkar Fair begins on Prabodhini Ekadashi and continues till Kartik Purnima. Most importantly, this fair is organized in the honor of Lord Brahma. Whose temple is located in Pushkar. Taking a bath in Pushkar Lake on Kartik Purnima leads to salvation. It is believed that circumambulating three Pushkars on Kartik Purnima is highly meritorious.

On this day, if there is Kritika Nakshatra, then it is a great Kartik, being Bharani gives special results. Its importance increases a lot when it is Rohini. Brahma, Vishnu, Mahesh, Tridev have called it a Mahapunit festival. Any charitable act on this day is believed to bring benefits and blessings equal to the performance of ten yagyas.

On this day, if Moon is on Krittika Nakshatra and Sun is on Vishakha Nakshatra, then Padma Yoga occurs, which is of great importance.

On this day, worshiping Shiva, Sambhuti, progeny, Preeti, Anusuiya and forgiveness Kritikas on moonrise gives virtuous results. By donating Vrisha after fasting in the night, one attains Shivalok.

Guru Nanak of Sikhs was also born on Kartik Purnima. Therefore, Guru Nanak Jayanti is also celebrated on this day.