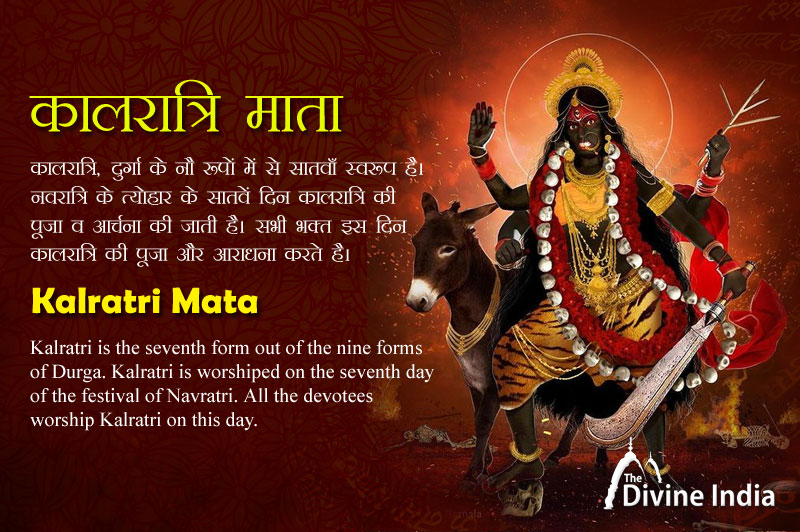 Kalratri is the seventh form out of the nine forms of Durga. Kalratri is worshiped and worshiped on the seventh day of the festival of Navratri. All the devotees worship and worship Kalratri on this day. On this day the mind of the seeker remains situated in the 'Sahasrar' chakra. For this, the door of all the accomplishments of the universe starts opening. Goddess Kalatri has a wide variety of forms - Kali, Mahakali, Bhadrakali, Bhairavi, Mritya, Rudrani, Chamunda, Chandi and considered one of the many destructive forms of Durga. Raudri and Dhumorna are among other lesser known names of Devi Kalatri.

Kalratri is one of the nine Durga forms. This seventh power of Maa Durga is considered to be Kalratri. The color of the body of Kaalratri Mata is completely black like a thick darkness. It is clear from the name that the form of the mother is terrible. The hair of the head is scattered and around the neck is a garland shining like lightning. Kaalratri is the power to destroy the dark situations. This is the power that protects even from time.

This goddess has three eyes. All these three eyes are round like the universe. Fire keeps coming out of their breath. She rides on the neck. The boar mudra of the raised right hand gives boons to the devotees. The lower hand on the right side is in Abhaya Mudra. That is, the devotees always remain fearless, fearless.

The upper left hand holds an iron fork and the lower hand holds a knife. Her form may be fierce, but she is always a mother who gives auspicious results. That is why she is called Shubhankari. That is, there is no need for the devotees to be intimidated or terrorized in any way by them. By seeing him the devotee becomes a partaker of virtue.

By keeping the deity of Maa Kalratri in one's heart, one should worship with a sincere feeling. He should strictly follow Yama, Niyama and Sanyam. Purity of mind, speech and body should be maintained. She is Shubhankari Devi. The auspiciousness derived from their worship cannot be counted. We should constantly remember, meditate and worship him.

There is a law to worship Maa Kalratri on the Saptami day of Navratri. By worshiping them, one gets freedom from all sins and enemies are destroyed, the speed increases.

The nature of Maa Kalratri is very scary to see, but she always gives auspicious results. That is why one of his names is also 'Shubhankari'. Therefore, there is no need for the devotees to be afraid or panic in any way.

Maa Kalratri is the destroyer of the wicked. The demons, demons, demons, ghosts, phantoms etc. run away in fear just because of their remembrance. These planets are also going to remove obstacles. His worshipers never have fear of fire, fear of water, fear of animals, fear of enemies, fear of night etc. By their grace, he becomes completely fear-free.

Meaning: O mother! Ambe, who is everywhere and famous as Kalratri, I bow to you again and again. Or I salute you repeatedly. O Mother, deliver me from sin.