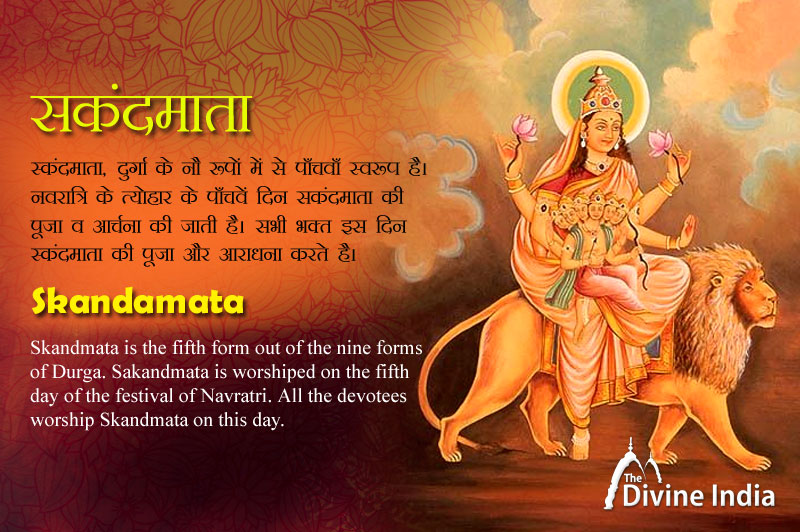 Skandmata is the fifth form out of the nine forms of Durga. Sakandmata is worshiped on the fifth day of the festival of Navratri. All the devotees worship Skandmata on this day. The significance of Pushkal has been told in the scriptures on the fifth day of Navratri-worship. All the external activities and mental attitudes of the seeker with the mind situated in this chakra disappears. He is moving towards pure consciousness.

The mother who opens the doors of salvation is the bestower of happiness. Mother fulfills all the wishes of her devotees. Skandmata has four arms. He is holding Skanda in his lap with the upper arm on the right side of Skandamata. There is a lotus flower in the lower arm. On the left side, in the upper arm, there is a lotus flower in the upper arm and in the lower arm. His character is completely auspicious. Sakandmata is seated on the lotus seat. That is why she is also called Padmasana Devi. The lion is his conveyance.

Lord Skanda is also known by the name 'Kumar Kartikeya'. He became the commander of the gods in the famous Devasura war. In the Puranas, their glory has been described by calling them Kumar and Shakti. Due to being the mother of this Lord Skanda, this form of Goddess Durga is known as Skandmata.

Skandmata, who created the new consciousness in the worldly beings living on the mountains. This goddess is worshiped on the fifth day of Navratri. It is said that even a fool becomes wise by his grace.

Its Pushkal importance has been told in the scriptures. Worshiping Skandmata fulfills all the wishes of the devotee. The devotee gets salvation. Being the presiding deity of the solar system, the worshipers of Skandmata become supernatural bright and radiant. Therefore, the seeker or devotee who worships this goddess by keeping the mind concentrated and pure, does not face any difficulty in crossing the ocean of the universe.

Meaning- O mother! Ambe, who is everywhere and famous as Skandmata, I bow to you again and again. Or I salute you repeatedly. O Mother, grant me freedom from all sins. On this day the mind of the seeker is situated in the 'Vishuddha' chakra. In his deity, Lord Skandji is sitting in his lap in the form of a child.