Holi and Why is Holi festival celebrate? 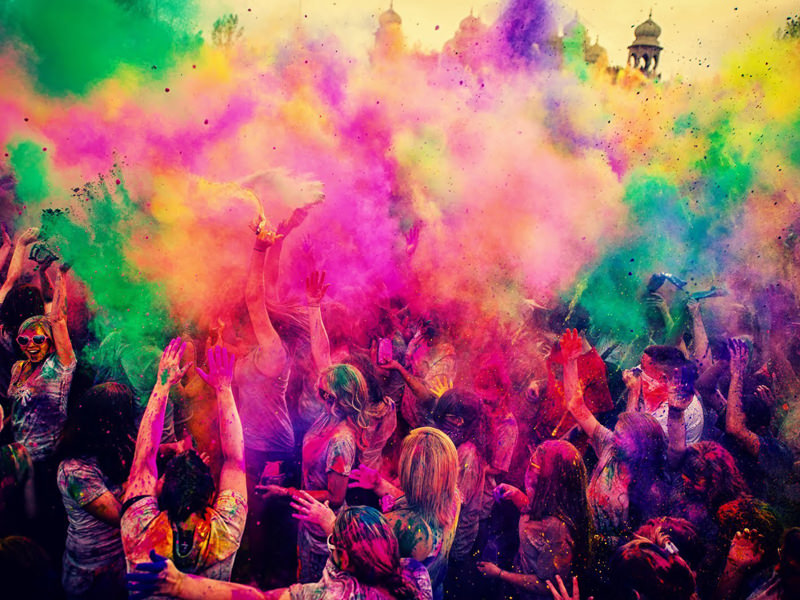 Holi is a festival of colours celebrated in spring season. It is an ancient Hindu religious festival and also sometimes called as festival of love.

It is primarily celebrated in India, Nepal, and other regions of the world primarily among the people of Indian origin. The festival is also celebrated in parts of Europe and North America as a spring celebration of love, frolic and colours. Mathura, Vrindavan, Barsana and Nandgaon's Lathmar Holi are famous, so is the tradition of Holi in other countries of the country. The festival is celebrated with enthusiasm and gaiety on the last full moon day of the lunar month Phalguna (February/March).

The festival has a religious purpose also, symbolically signified by the legend of Holika. One night before Holi, Holika bonfires are lit which is known as Holika Dahan (burning of Holika). People gather near fires, dance and sing songs of this festival. On the next day, Holi, also known as Dhuli in Sanskrit, or Dhulheti, Dhulandi or Dhulendi, is celebrated. The celebration starts the carnival of colours, where everyone plays, chases and colours each other with dry powder color and coloured water. Some people carry water guns and coloured water-filled balloons and throw at others and color them. Children and youth spray coloured water solutions (Gulal) at each other while elders smear dry coloured powder (Abir) on each other's face. Visitors to homes are first teased with colours, then served with Holi delicacies, desserts and drinks.

The festival also signifies the arrival of spring with the end of winter. For many people it brings a time to meet others and forget and forgive the animosity and repair the ruptured relationships by ending the conflicts and accumulated emotional impurities from the past.

Like Holika Dahan, Kama Dahanam is celebrated in some parts of India. The festival of colours in these parts is called Rangapanchami, and occurs on fifth day after Panchami (full moon).

Why is Holi festival celebrated?
Many stories are associated with the festival of Holi. The most famous of these is the story of Prahlad. It is believed that in ancient times, Hiranyakashipu was an extremely powerful demon. In the pride of his strength, he began to believe in God himself. Prahlada, son of Hiranyakshyap, was a devotee of Vishnu. Angry by Prahlada's Vishnu devotion, Hiranyaksyap gave him many harsh punishments, but he did not give up the devotion of Vishnu. Hiranyakshyap's sister Holika had a boon that she could not be consumed in the fire. Hiranyaksyap ordered that Holika Prahlada be in the fire, taking it in the fire. The holika was burnt on fire while sitting in the fire, but Prahlad survived. Holi is burnt on this day in memory of Vishnu devotee Prahlada. Which is called Holika Combustion (Holika Dahan).

In addition to the story of Prahlad, this festival is associated with the monstrous Dhundhi, Radha Krishna's renaissance and the rebirth of Cupid (Kam Dev). Some people believe that by coloring in Holi, people dance to Shiva's Ganas and make a scene of Shiva's procession.

About the Holi and Why is Holi festival celebrate?