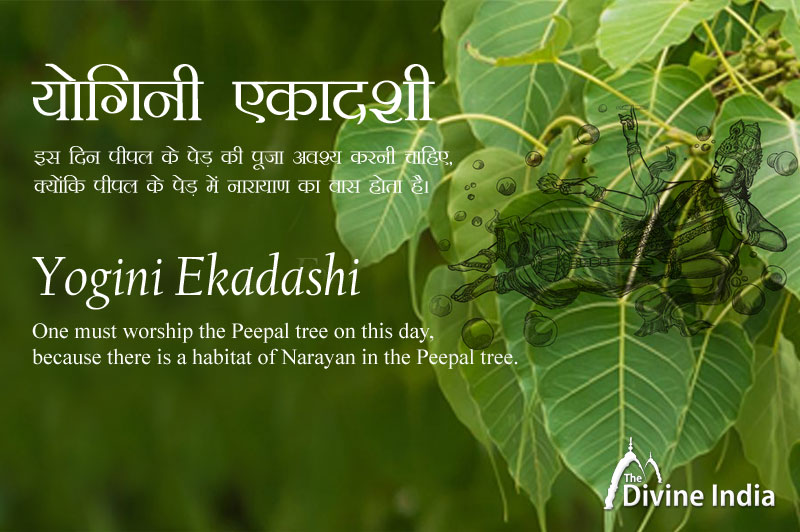 Ekadashi fasting holds an important place in Hinduism. Ekadashi of Krishna Paksha of Ashadha month is called Yogini Ekadashi. In this fast, the idol of Lord Narayana is bathed in the Ganges water and offered prasad, aarti is offered with flowers and lamps.

In Yogini Ekadashi fast, donations should be given to poor Brahmins. By observing this fast, the sin incurred by cutting the Peepal tree is destroyed and the heaven is attained.

This fast should be performed by both males and females. The idol of Lord Narayana should be bathed in the Ganges water. Worship and aarti should be done with flowers, dhoop and lamps. One must worship the Peepal tree on this day, because there is a habitat of Narayan in the Peepal tree.

In ancient times Dhan Kubera had a gardener named Hem. He used to bring flowers from Mansarovar daily to worship Lord Shankar. One day, he was in a monastery with his wife. Thus there was a delay in bringing him flowers. Kubera cursed Hem in anger to become a leper. He became a leper due to the curse of Kubera. In this form, he reached the ashram of the wandering Markandeya Rishi. Markandeya Rishi preached him to observe the fast of Yogini Ekadashi. Hem got healthy due to the effect of the fast and went to heaven wearing a divine body.