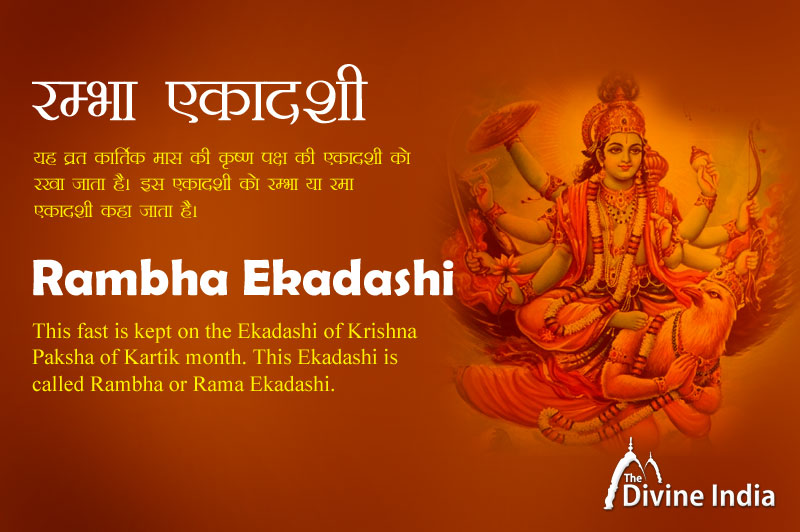 This fast is kept on the Ekadashi of Krishna Paksha of Kartik month. This Ekadashi is called Rambha or Rama Ekadashi. For married women, this fast is said to be auspicious and give happiness. On this day, worship Lord Krishna with all things; distribute prasad by doing naivedya and aarti. On the Dwadashi date, after feeding the Brahmin and giving Dakshina, send him away, then the fast should take food.

She was married to Shobhan, the son of King Chandrasen. Shobhan lived with the king. That's why he also started fasting on Ekadashi. On the Ekadashi of Krishna Paksha of Kartik month, Shobhan fasted for Ekadashi but died due to hunger. Due to this the king, queen and daughter were very sad but kept on fasting on Ekadashi.

Shobhan got residence in Dev Nagar situated on the Mandarachal mountain due to the effect of fasting. There Rambhadi Apsaras were ready in his service. Suddenly one day Muchukunda went to the Mandarachal mountain and there he saw Shobhan. After coming home, he told all the story to the queen and daughter. The daughter went to her husband after getting this news and both started living happily. Rambhadi Apsaras were engaged in his service. That's why this Ekadashi is called Rambha Ekadashi.

When is Ekadashi of Krishna Paksha of Kartik month?

Krishna Paksha Ekadashi of Kartik month is on Thursday, 09 November 2023. Goddess Lakshmi is worshiped along with Lord Vishnu on this day.

Who is worshiped on the day of Rama Ekadashi?

In Rama Ekadashi fast, the Keshav form of Lord Vishnu, the full-fledged avatar of Lord Vishnu, is duly worshiped with incense, lamps, naivedya, flowers and fruits of the season.