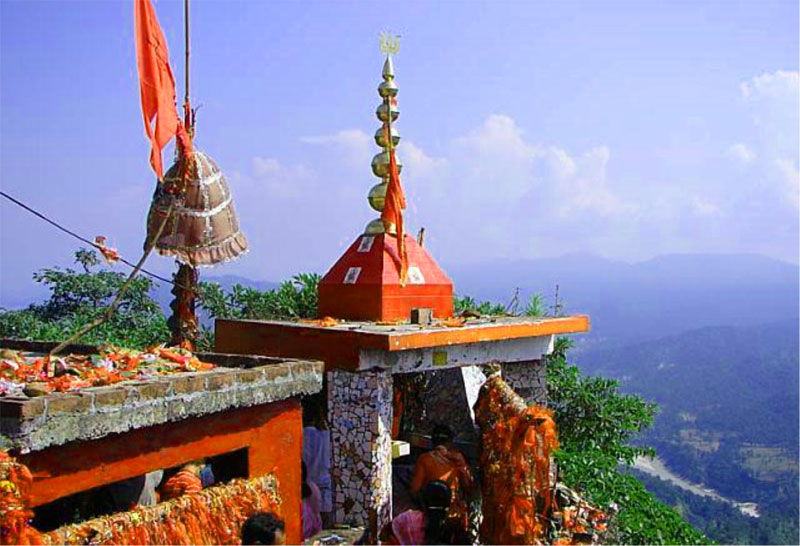 Purnagiri Temple is located at Tanakpur, Uttarakhand, India, at an altitude of 3000 feet on Annapurna peak. This temple is the main temple of the Hindus and is one of the main Shaktipeeth temples of Uttarakhand. Purnagiri Temple is considered as Mahakali Peeth and it is one of the 108 Shakti Peethas. This place is situated at a distance of 92 km from Champawat and only 18.6 km from Tanakpur. This Divine Place is considered in 51 Shakti Peethas.

According to mythology, Goddess Sati sacrificed her life by jumping into the fire of Yagna Kund organised by her father King Daksheshwara. When Lord Shiva was running around the earth carrying her body then Lord Vishnu divided the body in 51 parts using his Sudarshan chakra. Out of those 51 parts, Sati's navel fell on this divine place.

According to legend, Once upon a time, Goddess said to Seth that if you visit my temple, then you will get the son. Seth visited the mother temple and said that if he will get the son, he would make a gold temple for the Goddess. Seth's wish was fulfilled. But Seth became greedy and built a temple with copper in place of gold and made gold polish on the temple. Seth started going towards the temple. Reached the place, which called "Tuneash". He could not take the temple of copper forward. Then Seth had to kept that temple in the same place. Since then, the temple has been known from the mythical time as "the temple of false".

It is also said that about the Purnagiri Temple, child will gain long life and intelligence due to the mundan ceremony of the temple. That's why millions of pilgrims come for the mundan ceremony (the first hair cutting ceremony) of their children and offer the crop of hair at the altar of goddess.

All the festivals are celebrated in Purnagiri Temple, especially in the festival of Durga Puja and Navaratri, special pooja is organized. On this day, the temple is decorated with flowers and lights. The fair is held on this date for two months from Navratri of Chaitra month. The spiritual atmosphere of the temple provides peace to the heart and mind of the devotees.