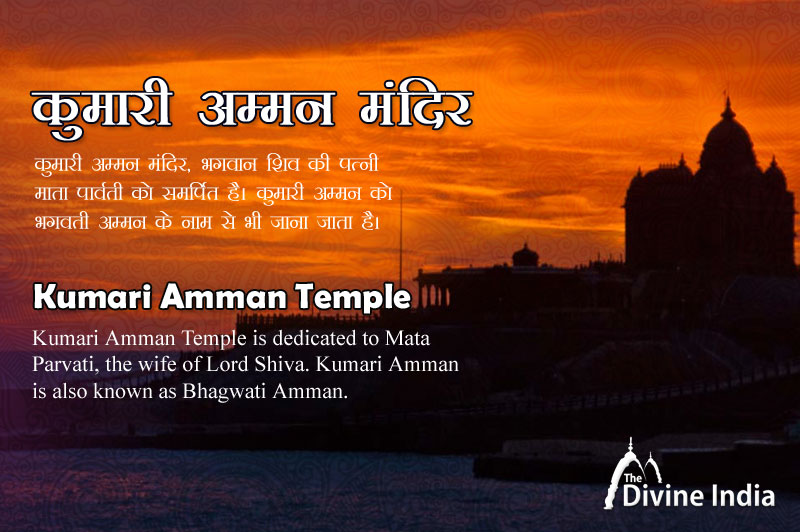 Kumari Amman Temple is one of the holiest temples in the world. The name of this temple comes in 108 Shaktipeeth. This temple is the home of Kumari Mata. Which is called Kumari Devi. Kumari Devi is believed to be an incarnation of Goddess Parvati. Parvati Mata took the birth of Kumari Devi to kill the demon named Banasura. Lord Shiva had given this boon to Banasura that he would die only by the hands of a virgin. This temple is more than 3000 years old and the temple is not only religiously important but also has historical importance. This ancient temple of Kanyakumari also offers mesmerizing natural beauty as it is situated on the banks of the vast stretch of sea. The spiritual aura, breathtaking natural beauty and an ancient architecture make this temple a religious point of view not only for the devotees but also for every traveler who visits the temple.

The presiding deity of the Kanyakumari temple is Kumari Amman, also known as Bhagwati Amman. The notable feature of the attractive idol of Goddess Kanya Kumari is the diamond nose ring of the Goddess. There are many popular stories associated with the attractive luster of the nose ring. According to legend, the nose ring diamond was obtained from the king cobra. According to a popular legend, the radiance reflected from the nose ring is so strong that once a sailor mistook it for a lighthouse. As a result, the ship collided with rocks. This is the reason why the eastern gate of the temple is kept closed and opened only five times a year on special occasions.

The Kumari Amman temple was built during the reign of the Pandya dynasty. It was later rebuilt by the Vijayanagara, Chola and Nayaka kings. A pavilion of sixteen pillars is built in the temple. The idol of Goddess Kumari is situated in the sanctum sanctorum of the temple. Which is the main attraction of this temple. The entry to the temple is done only through the northern gate. The eastern entrance of the temple is always kept closed. There are several other temples dedicated to Lord Surya Dev, Lord Ganesha, Lord Ayyappa Swamy, Goddess Balasundari and Goddess Vijaya Sundari within the temple complex. There is a well inside the temple from where water is used for the consecration of the goddess. This is known as Moola Ganga Theertham.

One can visit at any time of the year to have darshan of the Goddess and get the blessings of the Goddess. Traveling during the annual festivals offers a completely different experience. Vaisakhi festival is considered to be the main festival of Kumari Amman temple. Vaisakhi festival is celebrated for a period of 10 days. Religious processions are organized during this festival.

Other important festivals of the temple are Navratri Festival, Chitra Purnima Utsav and Kalabham Utsav.