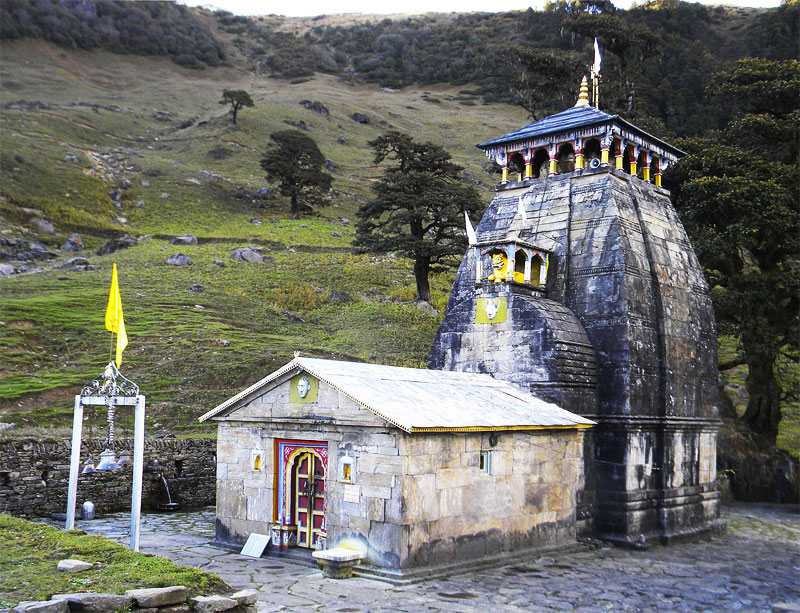 Madhyamaheshwar or Madmaheshwar temple is located in Mansoona village of Garhwal, Garhwal Himachalaya Mountain, Uttarakhand, India. It's a Hindu temple dedicated to Lord Shiva. Madhyamaheshwar Temple is one of Panch Panch Kedars and the fourth number is in Panch Kedar. Which is at an altitude of 3,497 meters (11,473 feet) above sea level. The stomach or navel (navel) of the middle or bull is considered as the divine form of Shiva, worshiped in this temple. The silver statues of this temple are transferred to Uikhamtha in the winter. Madhyeshwar Temple was built by the Pandavas.
The architecture of Madhyeshwar Temple is in the North Indian style. The temple is a small black temple on the top of the hill, which looks straight on the magnificent Chhakma peaks. In the present temple, a navel-shaped Shiva-Lingam, made of black stone, is situated in the holy place.

There are two other smaller shrines, one is dedicated to Shiva and Parvati and other Ardhanarishvara, which is the form of half-Shiva half-Parvati. On the right side of the main temple there is a small temple, which is a statue of Saraswati (called Hindu goddess of knowledge in Hindu religion), made of marble in the sanctum sanctorum.

Gaudhar and Kalimath are two important places on the path of Madhyamaheshwar. Kalimath, in particular, is of great significance for a large number of pilgrims, here pilgrims come for spiritual peace and hence this place is called Siddha Peeth. Kalimath is famous for the Mahakali and Mahalakshmi Devi temples, and one of the Lord Shiva and his cruel forms is famous for Bhairav. The time of Navaratri is of particular importance at this place when the big devotees come to this place. Gaudhar, in the final of the pedestrian track and near the temple, Madhyeshwar is the confluence of rivers Ganga and Marcganga and gives wonderful ideas.

According to a legend, When after the war of Mahabharata Pandavas wanted liberation from their sin, therefore Lord Krishna advised Pandavas that they would get the blessings of Lord Shankar. Therefore, Pandavas reached Varanasi to get the blessings of Lord Shankar, but Lord Shankar left Varanasi and hide in Guptkashi because Lord Shiva was annoyed with Pandavas, Pandavas had killed their dynasty. When Pandavas reached the Guptkashi then Lord Shankar reached Kedarnath where Lord Shankar had assumed the shape of the bull. Pandavas discovered Lord Shiva and received blessings from them. It is believed that When Lord Shankar disappeared in the form of a bull, the upper part of their torso appeared in Kathmandu. Now there is a famous temple of Pashupatinath. Shiva's arms appeared in Tungnath, mouth in Rudranath, navel in Madhyameshwar, hair in Kalpeshwar and Lord Shankar in the form of the shape of the back of Bull (hump), there is worshiped in Shri Kedarnath. Therefore, in these five places, Shri Madhyamaheshwar is called Panchkedar.