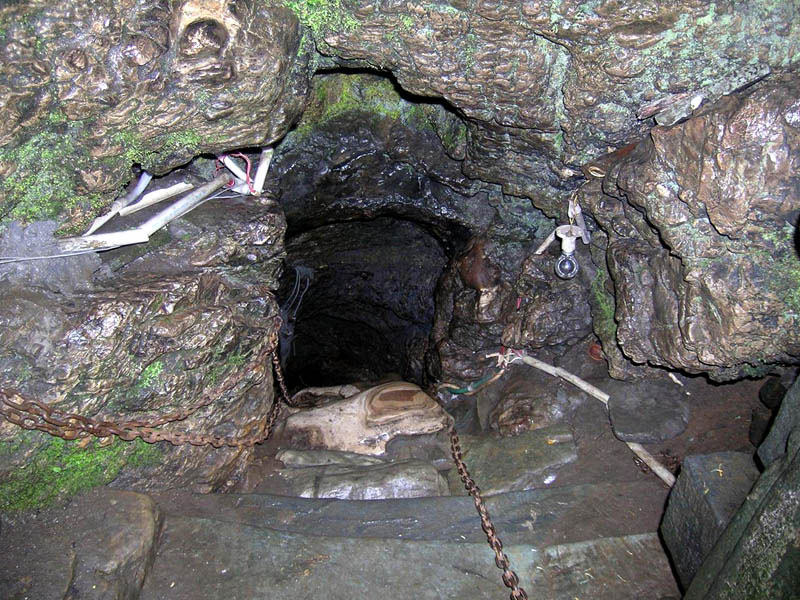 Patal Bhuvaneshwar is a limestone cave temple, 14 kilometers from Gangolihat in Pithoragarh district of Uttarakhand state of India. It is located in Bhuvaneshwar village. It is said that this underground cave is the residence of Lord Shiva and thirty three crore deities (33 crore types of gods in Hindu culture). The cave length is about 160 meters and the depth is 90 feet. Still there is no dearth of oxygen in the cave. Patal Bhuvaneshwar cave temple is at an altitude of 1350 meters above sea level. The construction of limestone cliffs has created various spectacular stalactite and stalagmite shapes of different colors and forms. The path of this is like a narrow tunnel that leads to many caves.

This cave is going to open like a narrow tunnel that leads to many caves. The cave is fully electrically published. Built in the flow of water, Patal Bhuvaneshwar is a series of caves within the caves.

As legends have it, a visit to Patal Bhubaneswar, is equal to a thousand times the visit to kashi, Baidyanath or kedarnath. In Skanda Purana, there is a description of receiving blessings in Manas Kand, Chapter 103, Patal Bhubaneswar.

It is believed that worshiping in Patal Bhuvaneshwar gives equal importance to the journey of Dhaam. The person who wants to feel the presence of eternal power should come to the holy Bhuvaneshwar located near the confluence of Ramganga, Saryu and Gupta-Ganga. Manaskhand, Skandapuran, whose 800 verses refer to Patal Bhubaneswar.

The first man to find this cave was Raja Rituparna who was the king of the Sun Dynasty who ruled Ayodhya during the ' Treta Yuga'. Which has been mentioned in Manaskhand and Skanda Purana.

In 1191 AD, Adi Shankaracharya searched this cave again. This was the beginning of modern pilgrimage history in Patal Bhubaneswar. In the cave, the construction of stones of Sheshnag can be seen. Inside the cave can be seen shapes like Havan Kund, Kedarnath, Badrinath, Mata Bhubneshwari, adi Ganesh, Lord Shiva's Hairs, Seven Kunds, Mukti Door, Dharma Door and other Deities.

Blog/Story
Mother, drink water will be a great virtue