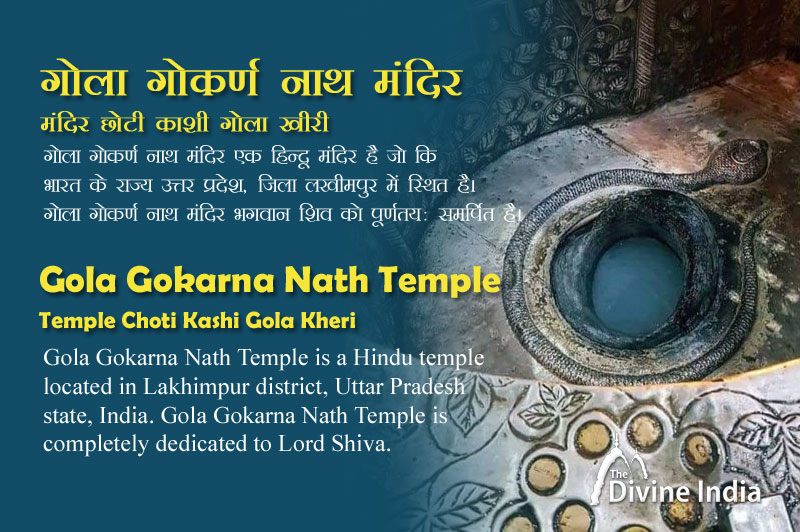 Gola Gokarna Nath Temple is a Hindu temple located in Lakhimpur district, Uttar Pradesh state, India. Gola Gokarna Nath Temple is completely dedicated to Lord Shiva. Gola Gokaran Nath is also known as Choti Kashi. It should be said that this Shiva temple is famous only by the name of Choti Kashi. The lingam in the Gola Gokaran Nath temple is a site of great importance for the devotees of Lord Shiva.

Story of Gola Gokarna Nath Temple Vaidyanath Temple which is similar to the state of Jharkhand in India. People believe that Lord Shiva, pleased with Ravana's penance, granted him a boon. Ravana requested Lord Shiva to accompany him to Lanka and leave forever. Lord Shiva agreed to leave on the condition that he should not be kept anywhere on his way to Lanka.

On the request of the deity, Lord Ganesha assumed the form of a shepherd and met Ravana on the way. Ravana gave the Shiva Linga to Ganesha due to a urinate (a call of nature). Lord Ganesha placed the Shivling on the ground.

Ravana was enraged that he failed to take the Shiva-linga back to Lanka, he pressed it on his head with his thumb. Ravana's thumb impression is still present on the Shivling. Because of that the Shivling became like a cow's ear and mounted about 5 feet below the ground level, hence the name Gokarna.

One of the oldest forms in which Lord Shiva is worshiped is that of a Lingam. It is said to represent identity, a medium through which one can connect with truth. It is also believed to be an original source of energy which resonates with the meaning of Shiva's name- 'the one who offers Mangalam'.

More than 10 lakh pilgrims visit the temple in the month of Shravan.