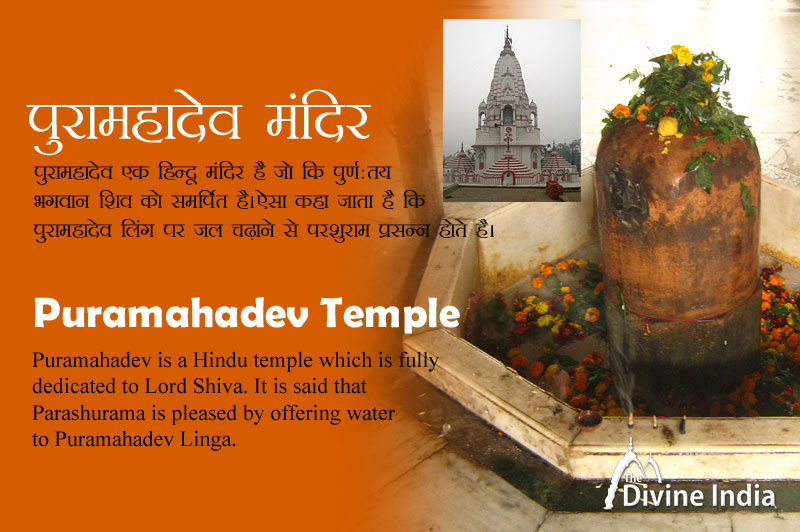 It is a belief of Puramahadev temple that lakhs of Shiva devotees anoint Parashurameshwar Mahadev by bringing holy water of Ganga from Haridwar to Kanwar on foot in the month of Shravan and Falgun. By doing this all the wishes of Shiva devotees are fulfilled.

Presently there is a Puramahadev temple, once long ago there used to be a Kajari forest here. In this forest, Rishi Jamadagni lived in his ashram along with his wife Renuka. Renuka used to make a raw pot every day and bring it filled with water from the river Hindon. She used to offer water to Shiva. The river Hindon, which has been called Panchtirthi in the Puranas and is also known as the Harnandi river.

There is an illustration in the Rimad Bhagwat that seeing Gandharvaraj Chitraratha living with Apsaras, Renuka, who went to the river bank to collect water for the havan, became enamored and stayed there for some time. Angry sage Jamadagni ordered all the sons to kill Mother Renuka as a punishment for his wife's anti-Aryan behavior and mental adultery.

The sage then asked his three sons to behead their mother, but their sons refused. Parashurama, the fourth son, beheaded his mother, accepting the father's order as his religion. Later, Parashuram ji had a severe after this, he started doing severe penance at a distance and started worshiping him by establishing Shivling there. Pleased with his penance, Ashutosh Lord Shiva appeared to him and asked him to ask for a boon. Lord Parashurama prayed for his mother to be revived and sought a boon only for the memory remove of her being killed. Lord Shiva revived his mother and also gave a parashu (farsa) and said that whenever you use it in the time of war, you will win.

Parashuram ji started living by making a hut in the same nearby forest. Haihaya dynasty ruler Kartavirya Arjuna (Sahastrarjuna) pleased Lord Dattatreya by austere penance and got a thousand arms and the boon of not being defeated by anyone in battle. Sahasrarjuna was killed because of being cursed by sage Vashishtha. Sahasrarjuna saw a Kapila Kamdhenu cow in the ashram of Jamadagni, the father of Parashurama, and with the desire to have it, he forcibly took Kamadhenu away from the ashram. When Parashurama came to know about this, he thought of bringing Kamadhenu back for the honor of his father and fought with Sahasrarjuna. Sahasrarjuna's arms were cut off in the battle and he was killed.

Then the sons of Sahasrarjuna killed their father Jamadagni in the absence of Parashurama in vengeance. Parashurama's mother Renuka, upset by her husband's murder, entered his pyre. This horrific incident enraged Parashurama and he took a vow - "I will die only after destroying all the Kshatriyas of the Haihaya dynasty". After that he fought 21 times with Haihayavanshi Kshatriyas of arrogant and evil nature.

In course of time the Puramhodava temple turned into ruins. After a long time, one day when the queen of Landoura went out to roam here, her elephant stopped there. Even after the great effort of the mahout, the elephant did not move from there, then the queen ordered the soldiers to dig that place. In the excavation, a Shivling appeared there, on which the queen got a temple built.

Jagadguru Shankaracharya Swami Krishna Bodh Ashram Ji Maharaj also did penance at this holy place, and by his grace Puramahadev Mahadev Samiti was also formed which runs this temple.

Blog/Divine Ayurveda
What is a Corona Virus and Virus?