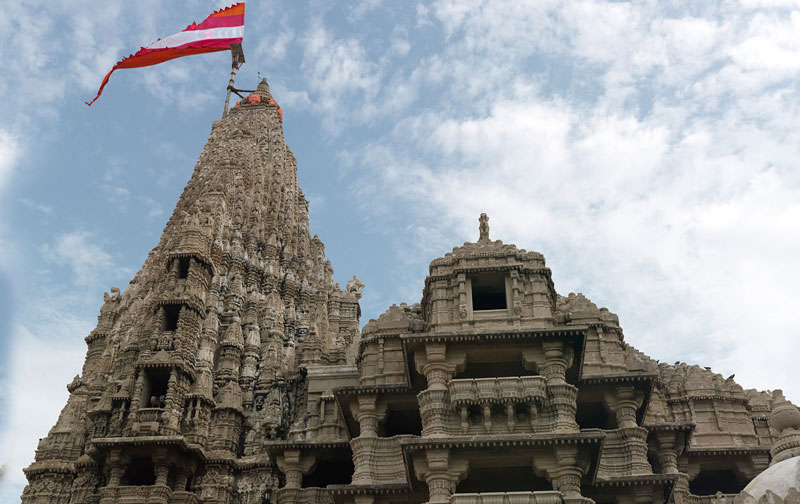 The Dwarkadhish temple is known as ‘Jagat Mandir’ or ‘Trilok Sunder’ (the most beautiful of the three worlds) temple, which is 5-storey building and supported by 72 pillars; It has been told by the archaeological that this temple is 2,200-2000 years old. The temple was expanded in the 15th-16th century. It is believed that this temple was constructed by Lord Krishna's grandson Vajrabh.

After the 8th century Hindu theologian and philosopher Adi Shankaracharya, the temple became part of the 'Char Dham' pilgrim considered to be sacred place to Hindus in India. The other three include Rameswaram, Badrinath and Puri. Dwarkadhish temple is the 108th Divine Temple of Lord Vishnu on the subcontinent, the glory of Divya Pradhan is also the Holy Scriptures.

It is believed that Lord Krishna had killed Kashsh, then Kansh's father-in-law Jarasand attacked Mathura 17 times and every time Lord Krishna was defeated. In every battle Mathura was greatly damaged, then Lord Krishna left Mathura and come in Saurashtra, made Dwarka his place of residence.

According to Hindu mythology, Dwarka was made by Krishna on a piece of land which was recovered from the sea. Rishi Durvasa once philosophy Krishna and his wife Rukmani ji. The Rishi wishes that Lord Krishna and Rukmani go with them to their place of residence. The Lord Shri Krishna and Rukmani agreed and started walking with the Rishi for their place of residence. After some distance, Rukmini got tired and requested water from Shri Krishna. Krishna opened a mythological hole and brought water from the river Ganges to that place. Rishi Durvasa was furious and curse Rukmini to stay in the same place. Dwarkadhish temple considered at the place where Rukmani stood.

In Gujarat there is a history in the city of Dwarka which are ancient centuries, and in the Mahabharata epic it has been mentioned as the Dwarka empire. Located on the banks of river Gomti, the city is described as the capital of Lord Krishna in mythology.

The flag above the temple represents the sun and the moon, which indicates that the sun and moon will exist on Earth until then Lord Krishna is present on the earth. The flag changes from 5 times in a day, but the symbol remains the same. The temple has a five-storey structure with seventy-two pillars. The temple's peak is 78.3 meters high. This ancient temple is constructed by limestone which is still in its original condition. The temple describes the complex sculpture performed by dynasties ruling over this region. The structure was not expanded by these works. There are two entrances in the temple, the main entrance (north gate) is called 'Moksh dwara' (the door of liberation). It takes entrance to the main market. The south door is called 'heaven gate' (gate to haven). 56 steps outside this gate which leads to Gomti river.