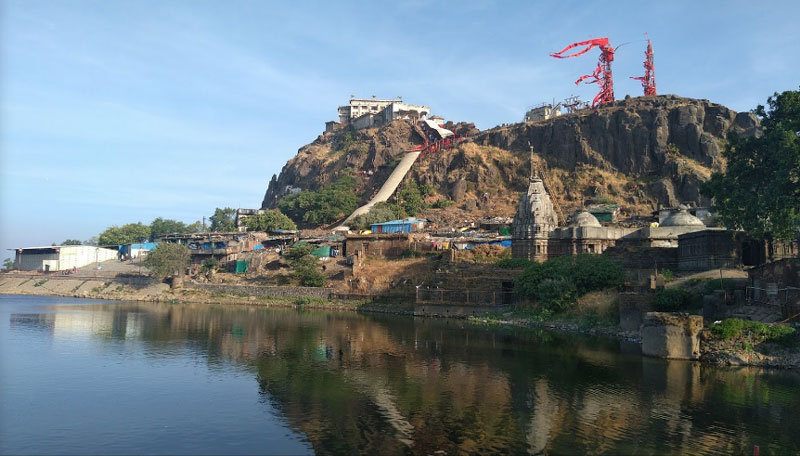 Kalika Mata Temple is a Hindu temple located on the summit of Pavagadh hill in Panchmahal district, Gujarat state of India. Kalika Mata Temple is a Hindu Goddess temple and pilgrimage center. This temple is located at this place during the 10th or 11th century. This temple is the oldest temple in the region. The name of this temple comes in the Shaktipeeth of Mother or it can be said that this temple is a Shaktipeeth. Three idols are installed in the temple. Kali Mata is on the right and Bahucharamata on the left and Kalika Mata is enshrined in the center. The temple is situated on a hill, devotees walk through the stairs to the temple. Ropeways have also been constructed due to which it is easy to reach the temple.

Fair is organized in the temple during the Navratri festival which is attended by thousands of devotees. According to Mr. RK Trivedi, the organizer of the fairs and celebrations of Gujarat, the worship of Goddess Kalika Mata was initiated by the local Lewa Patidar and Raja Sardar Sadashiv Patel. In the temple, Mata is worshiped as Durgo or Chandi.

According to the legend, once during the festival of Navratri, a traditional dance called Garba was organized in the temple. Hundreds of devotees danced in this fair. In this way, seeing the devotees dancing, Goddess Mahakali herself started dancing as local women. Meanwhile, the king of the kingdom, Pat Jaisingh who was dancing with the devotees. Seeing the Goddess dancing, he was enchanted by her beauty. Due to his lust, the king held the goddess's hand and made an unfair offer. The goddess warned him three times to drop his hand and apologize, but the king was not ready to understand anything because of his lust. Thus the goddess cursed that her empire would fall. Soon a Muslim invader Mahmud Begada invaded the kingdom. King Jaisingh lost the battle and was killed by Mahmud Begada.