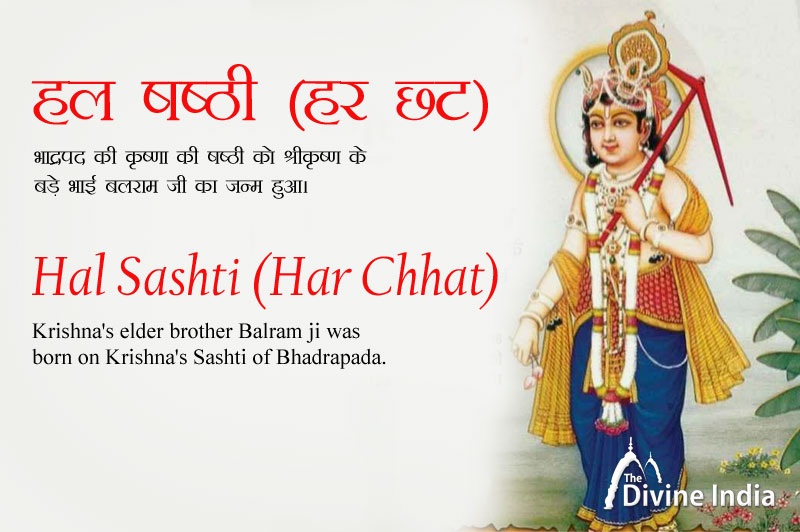 This day is very important for Hindus. Krishna's elder brother Balram ji was born on Krishna's Sashti of Bhadrapada. Balram ji is also known as Baldev, Balabhadra, Haladhara, Halayudh and Sanskar. Balaramji is considered an incarnation of Sheshnag. Some people observe the birth date of Mother Sita on this date.

Balaramji's main weapon is plow and pestle. Therefore, he is also called Haladhar. The name of this festival is called Hal Shashti after him. In the eastern districts of our country, it is also called Lalai Chhath. On this day, there is a law to make mahue tooth. In this fast, the use of fruits and grains mixed by plow is forbidden. Use of cow's milk curd is also prohibited on this day. Buffalo milk and yogurt are used.

In the morning, after bathing in the morning, a small pond is made by leaping the earth in which strawberry, palash, bunches are tied to each branch and every chhath made by it is buried and worshiped. In worship, roasted lava of satanja (wheat, gram, paddy, maize, sorghum, millet, barley) etc. is offered. Turmeric is also dyed and suhag material is dyed.

After the worship, the following mantra is prayed -

Meaning - O Goddess! Taking a bath in Gangadwar, Kushavarta, Vilvak, Neel Parvat and Kanakhal Tirtha, Lord Shankar is attained as a husband. Lalita Devi, who gives happiness and good luck, is a very good greeting to you, please give me a steady honeymoon.

The delivery time of a pregnant Gwlynn was near. She was suffering from childbirth. His curd-butter was kept for sale. He thought that if delivery was done, curd-butter would not be sold.

Thinking this, he put milk and yogurt pot on his head and went to sell, but on reaching some distance, he suffered unbearable labor. She went to a strawberry tree and gave birth to a child there.

She left the child there and went to sell milk and curd in the nearby villages. Incidentally, that day was Hull Shashthi. He sold the mixed milk of cow and buffalo only to the villagers by referring to buffalo milk.

On the other hand, a farmer was plowing the field near the strawberry under which he had left the child. Suddenly his oxen erupted and the child died due to plowing fruit into the body.

The farmer was very sad due to this incident, yet he acted with courage and patience. He put stitches in the child's clenched stomach with strawberry thorns and left him there. After some time Gwaleen arrived there after selling milk. Seeing such a child's condition, it did not take him long to understand that all this is a punishment for his sin.

She started thinking that if I had not sold cow's milk in lieu and had not corrupted the religion of the women of the village, my child would not have this condition. Therefore, I should return and tell all things to the villagers and make atonement.

Having decided this, she reached the village where she had sold milk and curd. He went around the street and told about his milk and curd and also about the punishment he received as a result. The women then forgave and blessed him with self-defense and taking pity on him.

When she reached the bottom of the strawberry after taking blessings from many women, she was surprised to see that her son was lying there in a living state. Then he considered lying for selfishness as a Brahman murder and vowed never to lie.