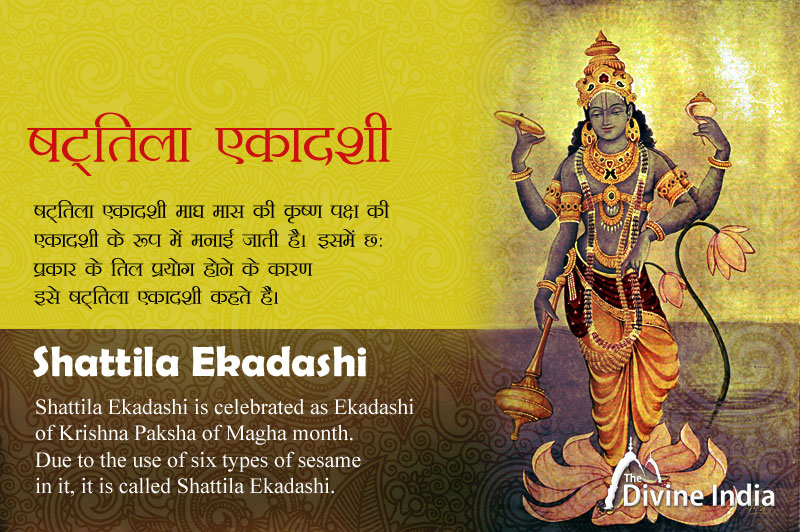 Ekadashi fasting day is a special day in Hinduism. Lord Vishnu is worshiped on the day of Ekadashi. Shattila Ekadashi is celebrated as Ekadashi of Krishna Paksha of Magha month. Due to the use of six types of sesame in it, it is called Shattila Ekadashi. After mixing sesame seeds in Panchamrit, Lord Vishnu is first bathed. On this day, sesame seeds are eaten mixed. Do Hari Kirtan during the day and sleep in front of the idol of God at night.

For Shattila Ekadashi fast, Pulasya Rishi told Dalbhya Rishi that the month of Magha is holy and holy, fasting and penance are of great importance in this month. The Ekadashi that falls in Krishna Paksha in this month is called Shatila. On the day of Shattila Ekadashi, one should observe a fast for Lord Vishnu. Those observing fast should worship Lord Vishnu with scent, flowers, incense lamp, tambul with Shodshopchar. Make khichdi mixed with urad and sesame and offer it to God. During the night, the Havan should be done 108 times with the help of this mantra Om Namo Bhagwate Vasudevaya Swaha.

By observing the fast of Shattila Ekadashi, one gets freedom from the crimes committed out of ignorance. On this day, things made of sesame or sesame should be donated. The 6 types of sesame donation that the sage has talked about are as follows

Narad Muni reached Vaikunth, the abode of Lord Vishnu while traveling to Trilok. After reaching there, he bowed down to Vaikuntha husband Shri Vishnu, expressing his curiosity to him and asked him what is the story of Lord Shattila Ekadashi?

When asked in this manner by Devarshi, Lord Vishnu said that in ancient times a Brahmin lived on the earth. The Brahmin had great faith and devotion in me. This woman used to keep all the fasts for me. Once he worshiped me by fasting for a month. Due to the effect of fasting, the woman's body became pure, but this woman never used to donate food to Brahmins and gods, so I thought that this woman would remain unsatisfied even after staying in Baikund, so I myself reached for alms one day.

When I begged the woman for alms, she picked up an earthen lump and placed it on my hands. I returned to my abode with that pind. After a few days that woman also left her body and came to my world. Here he found a hut and a mango tree. Seeing the empty hut, the woman came near me frightened and said that I am pious, then why have I got an empty hut. Then I told him that it happened because of not donating food and giving me a lump of clay.

I then told that woman that when the girls of God come to meet you, then you should open your door only when they tell you the law of fasting on Shattila Ekadashi. The woman did the same and the Brahmani fasted on Shattila Ekadashi by the methods which Devkanya had said. Due to the effect of the fast, his hut was filled with food and money. Therefore, O Narada, consider it to be true that a person who observes fast on this Ekadashi and donates sesame seeds and food, attains liberation and prosperity, although there is no provision of fasting anywhere in our scriptures.

Blog/Spiritual science
Why do Hindu women put vermilion in Mang?