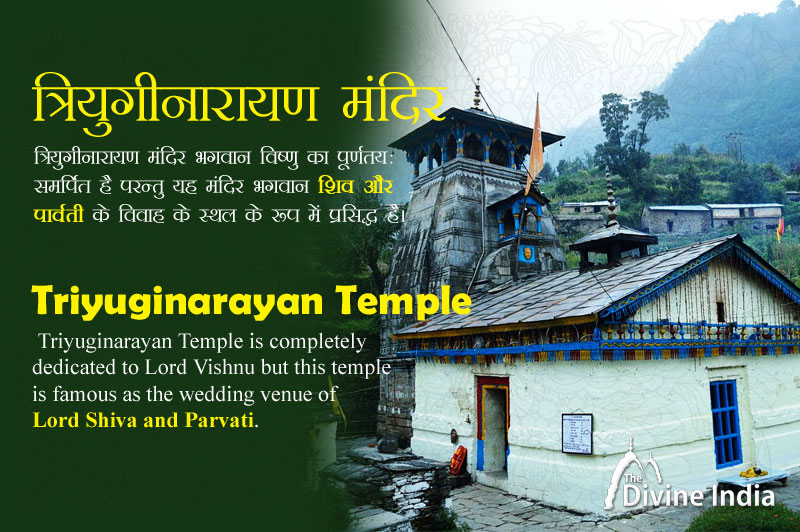 'Triyuginarayan' is made up of three words. These words mean: 'Tri' means three. The meaning of 'yugi' reflects the duration of time. Yuga and Narayan are a name of Lord Vishnu. Hence this place is named 'Triyugi Narayan'. In Sanatan Dharma, the era is described in four periods of time. These are the four era:- Satya Yuga, Treta Yuga, Dwapar Yuga and in last Kali Yuga which is the present era.

The architectural style of Triyuginarayan Temple is similar to the Kedarnath temple. This temple looks exactly like the Kedarnath temple and hence attracts many devotees. The present temple is also called 'Akhand Dhuni Temple'. It is believed that it is made by Adi Shankaracharya. Adi Shankaracharya is credited with construction of several temples in Uttarakhand region. The temple has a 2 -foot statue of Lord Vishnu and Goddess Lakshmi.

According to Hindu mythology, the goddess Parvati, who was the daughter of Himavat or Himalaya. Devi Parvati took the re-birth of Lord Shiva's first wife Sati - who sacrificed her life while insulting Shiva by his father. Mother Parvati had a hard penance to marry Lord Shiva so that Lord Shiva could be found as a husband.

Lord Vishnu formally gave the marriage form and served as Parvati's brother at ceremonies, Lord Brahma ji served as a priest in the wedding. The marriage was held in the presence of all the sages. The right place of marriage is marked by a stone called Brahma Shila in front of the temple. The greatness of this place has been seen in the place of place. According to Holy Scripture, pilgrims visiting this temple are considered as holy of Agni Kund as sacred and take it with them. It is also believed that this ash fills marital life with joy.

All saints and saints attended the ceremony in the marriage. The fixed place of the wedding venue is called Brahm Shila which is located right in front of the temple. The greatness of this temple is also described in the site Purana.

Mata Parvati was the daughter of the Himalayas, who was the king of Himavat. Triyuginarayan place was the capital of Himavat.

It is mentioned in the Vedas that this Triyuginarayan Temple is established from Tretayuga. While Kedarnath and Badrinath were established in Dwaparyuga. It is also believed that Lord Vishnu incarnated the Vamana Devta at this place. Here Vishnu is worshiped as Lord Vamana deity.

Devotees travel to this holy Triyuginarayan temple, they take the galaxy of the unbroken Jyoti ignited here so that their married life will always be happy with the blessings of Shiva and Parvati.

Blog/Hinduism
21 facts related to Ramayana that you should know ...