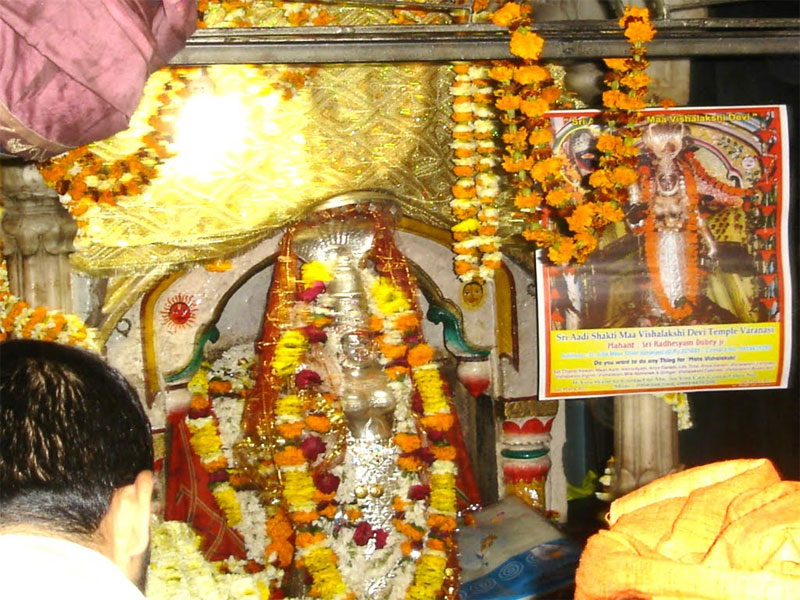 Visalakshi temple is known for the Kajali Tij festival, which was held on the third day during the fortnight (two weeks time) in the Hindu month of Bhadrapad (August) on the third day.

This temple is one of the 51 Shaktipeeths of Mother. Shakti is worshiped as Goddess Visalakshi in this temple and Bhairav is worshiped as Patron or Kaal Bhairav. According to the Puranas, wherever the pieces of the sati, the clothes or the ornaments held, have fallen, wherever Shaktipeeth came into existence. They are called the most sacred shrines. These shrines are spread across the entire Indian subcontinent.

According to mythology, Devi Sati gave her life by jumping into the fire of Havan organised by her father King Daksheshwara. When Lord Shiva was running around the earth carrying her body then Lord Vishnu divided the body in 51 parts using his Sudarshan chakra. Out of those 51 parts, from which the right earring of Sati fell to this place.  Hence this place is also called 'Manikarnika Ghat'.

According to another narrative, Mother Annapurna, whose blessings, all the creatures in the world receive food, they are 'Vishalakshi'. According to the legend of 'Skanda Purana', when the sage was not offering any food in Varanasi, then Vishalakshi appeared in the role of a housewife and gave food to the sage Vyas. The role of Visalakshi was very similar to Annapurna.

All the festivals are celebrated in the Shri Vishalakshi Temple, especially the special puja on the festival of Kajali Teej, Durga Puja and Navaratri. On this day, the temple is decorated with flowers and lights. The spiritual atmosphere of the temple provides peace to the heart and mind of the devotees.